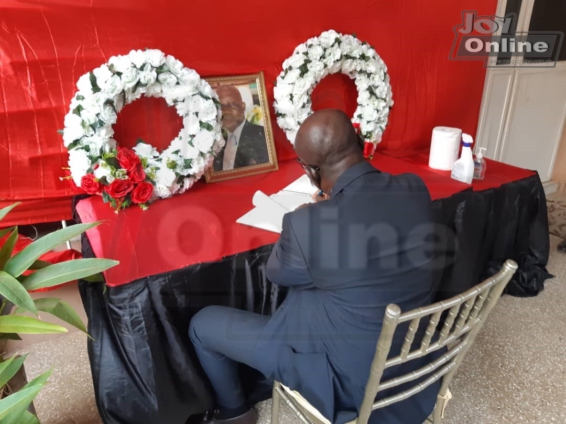 The Attorney-General and Minister for Justice has eulogised the late Justice Samuel Marful-Sau, describing him as an excellent Common Law judge with immense intellectual strength.

He made the observation when he visited the residence of the late Supreme Court Judge to commiserate with the family over their loss and to sign a book of condolence in memory of the departed judge.

Justice Marful-Sau, the 64-year-old Supreme Court Judge, is believed to have passed on Tuesday, August 10, 2021, at the Ga East Hospital.

Mr Dame also described the late Justice Marful-Sau as a good law teacher who taught Civil Procedure at the Ghana School of Law for 10 years.

According to Mr Dame, what struck him more about Justice Marful-Sau was his integrity and incorruptibility and was never scandalised anywhere, adding that posterity and the law practice would be kind to him.

He said Justice Marful-Sau would be remembered for his solid judgements, fairness and wisdom, citing the Republic vs Gregory Afoko as well as Exton Cubic matter.

He said the late Supreme Court Judge has contributed immensely to the jurisprudence of Ghana and that his demise has made Ghana poorer for it.

In her comment, Ms Diana Asonaba Dapaah, Deputy Attorney-General, stated that Justice Marful-Sau’s invaluable attribute of godliness, integrity, knowledge and humility is what Ghana has lost, saying it is rare in many human beings.

Ms Dapaah also stated that Justice Marful-Sau would be remembered as a person who did not shy away from his faith, and from his life, it is evident that this faith is bordered on certain principles and virtues that is needed in the justice system like fairness, justice and humility.

Justice Marful-Sau was one of the seven justices of the Supreme Court who heard the 2020 election petition filed by former President John Daramani Mahama challenging the validity of the election of President Akufo-Addo. He was the fifth most senior judge of the 16-member Supreme Court.

He was nominated to the Supreme Court together with three other judges, Justices Agnes Dodzie, Professor Nii Ashie Kotey and Nene Amegatcher, by President Akufo-Addo in 2018.