A campaign for a baby with Down's Syndrome left with his surrogate Thai mother by an Australian couple has raised over $120,000 (£70,000).

Pattaramon Chanbua was left to care for him after his Australian parents only wanted his healthy twin sister.

Mrs Pattaramon was told of the child's condition four months after becoming pregnant and the couple asked her to have an abortion but she refused, saying it was against her Buddhist beliefs. 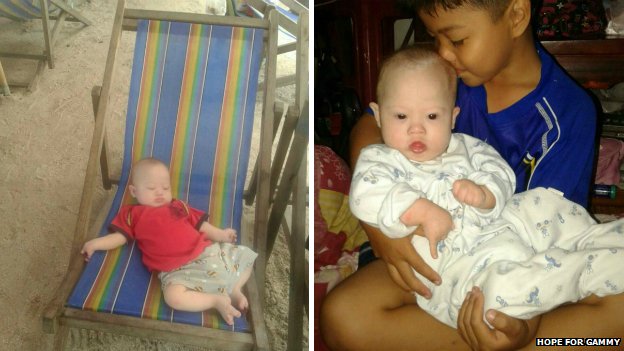 The 21-year-old, who already has two children, says she cannot afford to pay for the expensive treatment to deal with his life-threatening heart condition.

"The money that was offered was a lot for me. In my mind, with that money, one, we can educate my children, we can repay our debt," she told Australia's ABC broadcaster.

There were also dozens of messages of support for Gammy and her mother, and several expressing outrage at the Australian couple's actions.

"May this selfish and heartless couple be exposed and shamed for this horrible neglect!" one comment read.

A spokesman for Australia's foreign affairs department told the AFP news agency it was "concerned" by the reports and was in consultation with Thai authorities over surrogacy issues.

Tares Krassanairawiwong, a Thai health official, said it was illegal to pay for surrogacy in Thailand.

"Surrogacy can be done in Thailand but it has to comply with the laws. A surrogate has to be related to the intended parents and no money can be involved."