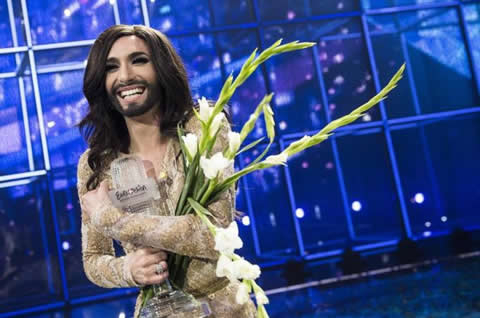 An Austrian bearded drag queen has won the annual Eurovision song contest in Denmark, watched by 180 million people in 45 countries.

Conchita Wurst, real name Tom Neuwirth, triumphed in Copenhagen on Saturday with 290 points with the song, Rise Like A Phoenix. The runner-up, Netherlands, scored 238 points.

Collecting the trophy on stage, Wurst said: "This night is dedicated to everyone who believes in a future of peace and freedom. You know who you are – we are unity and we are unstoppable."

Wurst, Austria's first Eurovision victor since 1966, attracted controversy prior to the event. Online petitions began in Armenia, Belarus and Russia to have the singer removed or edited out of broadcasts in their home country.

The Russian petition garnered more than 23,000 signatures and one politician in the Russian city of St Petersburg said Russia should boycott the event, saying it had become a "pan-European gay pride parade".

Wurst, who wore high heels, false eyelashes and a full beard, told a news conference afterwards: "For me, my dream came true. But for our society, it just showed me that there are people out there who want to go into the future and go on, you know, not stepping back or thinking in the past."

Russia suffered at the hands of the live audience, with people booing countries that awarded it points. The loudest and longest boos were, however, reserved for the Russian presenter reading out votes for participating countries.