Volkswagen will not replace the current Beetle

VW's head of research and development Frank Welsch, told Autocar at the Geneva Motor Show this week that "two or three generations is enough now."

The executive said that the company’s new T-Roc Convertible will eventually replace the Beetle, Golf and Eos cabriolet models in 2020. And The I.D. Buzz will replace the Beetle as the brand’s so-called “heritage” vehicle in 2022.

The news is disappointing to Beetle enthusiasts who, admittedly, have been dwindling in number. One fan, Julie Linderleaf, a Lansing, Michigan high-school English teacher, says she rewarded herself with a 2017 blue Beetle Cabrio following a divorce. 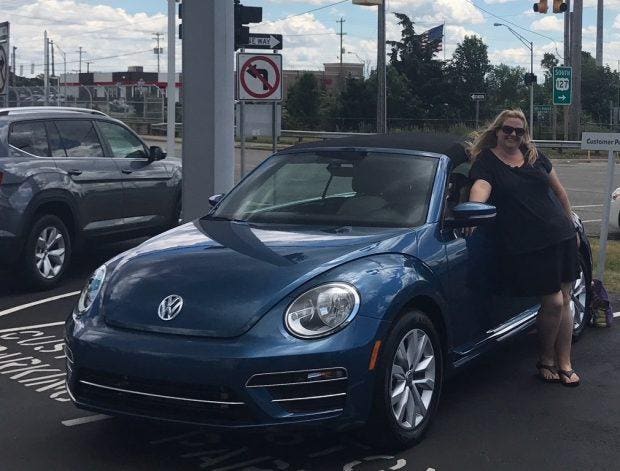 Julie Linderleaf from Lansing, Michigan is a happy Beetle Cabrio owner sad to find out her car is the last of its kind.

“My feelings are mixed today,” said Linderleaf. “I am glad that I bought my new one before they phased it out, but a bit sad knowing I will never be able to buy a new one again. I will take good care of this one,” she said. “

When the VW board met last November, VW’s Welsch told the enthusiast magazine that it approved a plan for up to 30 electric vehicles in the next ten years, but there was no support for a new Beetle in that mix. Sales have been sluggish and enthusiasm for the design was thin inside the company and among dealers.

Still, there is no vehicle in the history of Volkswagen to have the global impact that the Beetle has had in product design, engineering, marketing and pop culture. Indeed, at the close of the 20thcentury, the Beetle was often cited in the Top Three “Most Influential” vehicles of the era.

There were so many such lists that the VW was likely the one most likely to be in the Top Three on any Top Ten list. 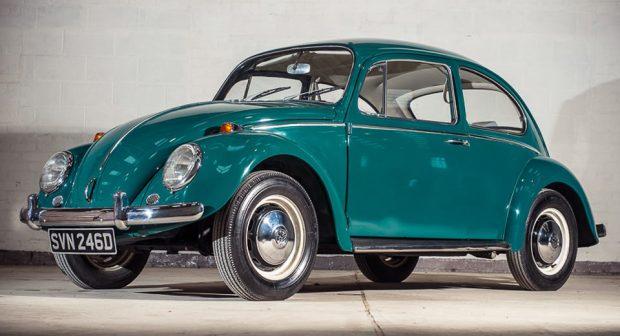 The Beetle originally sprung from a marriage of visions between Ferdinand Porsche and Adolf Hitler. The former, the leading automotive engineer of his time and the namesake for today’s German company, had long had an idea for a “people’s car,” a mass-produced reliable vehicle that working-class Germans could afford. He modelled the idea after Henry Ford’s Model-T, but with a very different design aesthetic. The Nazi Party Chancellor of Germany admired Porsche’s work and felt that giving working-class Germans an affordable car would endear him to the masses. Hitler also believed he needed to advance Germany’s economy by ruling Europe’s highways with the affordable “Type 1” sedan, which would become known as “The Beetle,” and later “The Bug” to others.

The scheme to mobilize the masses in Germany was interrupted by Germany’s invasion of Eastern Europe and the start of World War Two. The Civilian “Type 1” gave way to an array of military vehicles to mobilize the German Army. The U.S. would have the Jeep Willys, but the German Army would have the Kubelwagen, which was designed off the Type 1 chassis. The Kubelwagen would later be sold to civilians in Europe and Mexico, and be sold in the U.S. as the “Thing.” 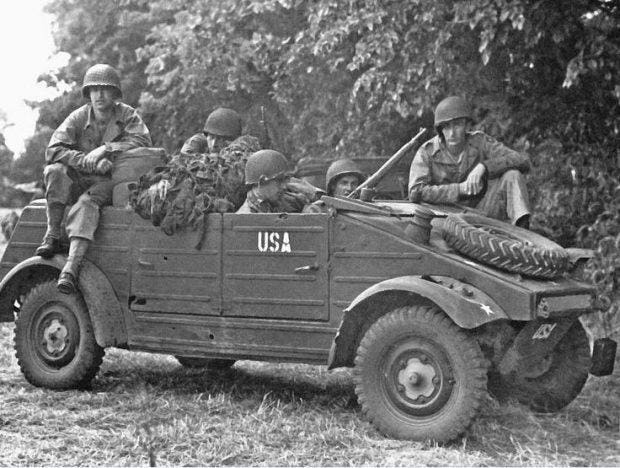 This Kubelwagen was captured and rebadged with USA The German, air-cooled, Kubelwagen, based on the Beetle chassis, was air-cooled and more effective in North African desert than the Jeep Willys. Later, civilians would buy the military vehicle as 'The Thing."

After the war, German refugees began building Kubelwagens and Type 1 sedans from scrounged raw materials in the bombed out Wolfsburg factory that had been turning out war material. Those efforts, supported by a British Army officer who wanted to see the German people get on their feet after the war, blossomed into Volkswagen AG, which now vies to be the biggest car company in the world by volume each year with General Motors and Toyota.

The rear-engine, rear-drive, air-cooled two-door Beetle was a staple of post-war Europe and then spread to Asia, South America, Japan and North America. There is hardly a corner of the globe that has not seen the VW Beetle on its roads.

The Beetle was by far the top-selling imported vehicle in the U.S. into the early 1970s until it was eclipsed by Japanese brands. The car was discontinued in 1979 in the U.S., but continued to be built in Mexico and sold there and in South America for another two decades.

Volkswagen's U.S. unit, however, hit hard times in the 1990s. The flow of new cars–Jettas and Golfs–from its Puebla, Mexico plant virtually stopped for more than a year while the company tackled epic quality issues. Annual sales fell below 50,000. 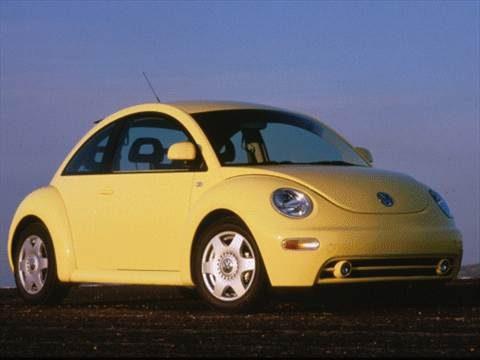 The 1998 New Beetle saved VW's bacon in the U.S. by stirring up interest in what was becoming a moribund brand.

A redesigned and reimagined Beetle, called "New Beetle," was introduced in the U.S. in 1997, and the hype and hoopla over the car, which touched a nostalgia streak in baby boomers, rescued the company’s U.S. business by driving massive foot-traffic to VW dealerships.

Discontinued in 2011, that “New Beetle” was replaced by a new "Beetle," the one sold today, which was designed to be less bulbous and more apt to be purchased by men. Sales, though, have never lived up to hopes. There were fewer than 24,000 sales of the Beetle last year in Europe, and fewer than 12,000 in the U.S.

Will Volkswagen ever make another Beetle? It’s hard to say. The German executives that killed it off in Europe and the U.S. after 1979 never thought they would go back. The new I.D. Buzz is a nod and homage to the Microbus, the coming expression of VW's heritage.

Perhaps absence will make the heart grow fonder for the Beetle again. But I would not count on it.