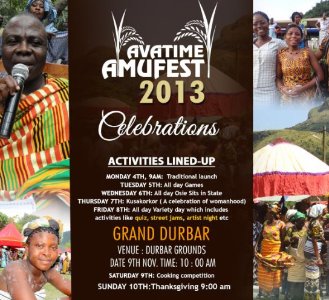 The Chiefs and people of Avatime in the Ho West District of the Volta Region have launched this year's Rice (Amu) Festival dubbed "Amufest 2013".

The fourth edition of the Rice festival, is expected to take place from November 3-10, 2013, at Avatime Dzogbefeme. The theme for this year's event is "Unity and Development in Avatime through Rice Culture and Eco-tourism".

Speaking at the launch and fund raising event in Accra, Osie Adzatekpor VII, Paramount Chief of the Avatime Traditional Area said one of the objectives of celebrating the festival is to popularise the consumption of brown rice, which is a delicacy for the people of Avatime.

Osie Adzatekpor VII said, the festival would be used to showcase the nutritional value of the local brown rice " to make young men stronger and revive old age" as well as promote the tourism potentials of the area.

District Chief Executive for the area, Samuel Ewoade noted that the District, which is barely a year old, is fast gaining nationwide recognition due to popularity of the Rice festival which has become an annual event.

Mr. Ewoade commended the planning committee for successfully organising the event over the past years and pledged the Assembly's support to make the 2013 edition a success.