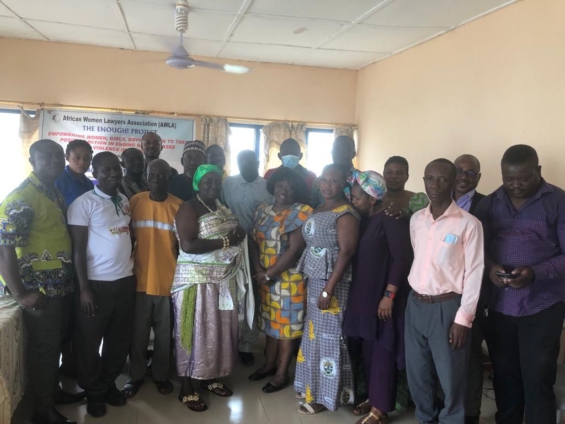 The African Women Lawyers Association (AWLA) has held a week long stakeholder workshop with its Court Users Committees (CUCs) in the Kintampo North Municipality of the Bono East Region.

The workshop forms part of AWLA’s implemented project aimed at promoting experience sharing in ensuring justice delivery for the voiceless in matters related to Sexual and Gender-based violence.

Executive Director of AWLA, Edna Kumah who took the participants through various aspects of how to handle SGBV issues urged them to report SGBV cases to appropriate quarters to ensure their effective prosecution.

“We have to take SGBV cases seriously and ensure that we report people involved in the act to the Police because they are criminal cases and need to be addressed as such,” she said.

The project initiated in the year 2020 also seeks to improve on justice delivery system by empowering citizens to develop positive attitudes and relevant skills for effective participation in justice delivery processes in the country.

Madam Edna Kuma, further stated that the CUCs formed through the project are to assist people, especially court users (those who have their cases pending in court), to help facilitate the court processes and obtain justice, especially for women and children.

She said most citizens lack knowledge on the processes to follow to demand justice when their rights have been infringed on and sometimes feel intimidated when in court.

Some key issues raised from participants as affecting justice delivery at the event included; long distances from court, limited number of courts, frequent adjournment of cases and additional payment to bailiffs for serving the writ of sermons, even though payment for bailiffs are part of the filling fees, among others.

The mentorship programmes for peer educators in schools; empowerment on women rights and SGBV action plan development for teachers, and the workshop for stakeholders in rights protection formed part of the implementation of AWLA’s Strengthening Communities against SGBV project in Techiman and Kintampo.

The intervention which is supported by the European Union, Oxfam Ghana, and WiLDAF, seeks to reduce SGBV against girls in schools and communities within the project districts in order “to create an enabling environment for girls and women to know, claim and exercise their rights to end sexual and gender-based violence in Ghana”.