Bagbin accident: Driver who rammed into convoy under police guard in hospital 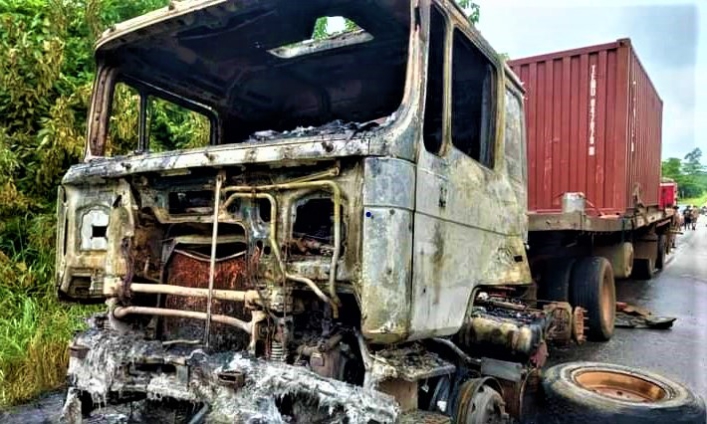 The driver who caused a motor accident that killed a dispatch rider at Juaso in the Ashanti region has been placed under police guard.

The accident occurred at about 8 am Friday at Juaso on the Konongo-Nkawkaw stretch of the main Kumasi-Accra road.

Doctors at the Juaso Government Hospital say the driver of the Nissan Sentra vehicle, with registration GT 2173-21, Philip Anamang, who sustained injuries, is in stable condition.

His vehicle, travelling along the Kumasi-Nkawkaw section of the Kumasi-Accra highway, crushed the motorbike as he attempted to overtake an articulated truck ahead of him.

Chief Inspector Abednego Kaakyire, the lead rider, was part of a police-military and civilian advanced convoy of Speaker of Parliament, Alban Bagbin when he was crushed to death.

Upon arrival at the Juaso Government Hospital, he died after his Honda motorbike with number GP 2079 collided head-on with a Nissan Sentra vehicle.

Police say whilst signalling other motorists to give way, the driver in charge of the Man Diesel truck with registration GR 6379 X driven by Mustafa Azure obeyed the signal and swerved to the pavement.

Anamang, driving a Nissan Sentra car with registration AS 2173-21 following the trailer, attempted to overtake the truck and collided with the police rider.

The rider fell on the road due to the impact whilst the motorbike dragged underneath the truck.

The articulated truck with registration GR 6397 X caught fire from sparkles drawn from the motorcycle as it dragged under the truck for several meters. Meanwhile, suspect driver Mustafa Azure in charge of the trailer, has been detained to assist with police investigations.

According to him, the driver of the Nissan Sentra vehicle remains a suspect as police launch investigations into the accident.

Meanwhile, suspect driver Mustafa Azure in charge of the trailer, has been detained to assist with police investigations while the body of the late Chief Inspector Kaakyire is sent to the Police Hospital for autopsy.