Battle over toilet ends up in court 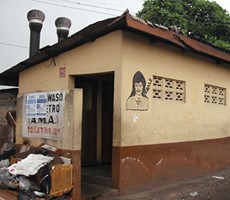 A seeming war over a toilet is currently looming in the Ashanti regional capital, Kumasi.

The Suame Constituency chairman of the ruling National Democratic Congress, Chief Ali, has been accused of seizing the public toilet there.

His accuser, an assemblyman Nana Kofi Senyah insists the toilet at the Kotoko suburb was placed under his control two years ago.

But Chief Ali, who doubles as the sub-metro chairman, has denied the accusation.

He told Joy News the assemblyman refused to account for revenue he collected over two years now.

He said the district assembly has the right to take back the toilet from anyone who fails to render accounts to it over a period of time.

Chief Ali said the assembly wrote a letter to him, spelling out their decision to take control of the facility.

He denied that the facility that serves about 4000 people in the community has been closed to the public.

He noted that the facility has been generating enough revenue for the assembly but could put any figure to it.

However, when Joy News reached Nana Kofi Senyah to shed more light on the issue, he declined to comment saying the issue is currently in court.