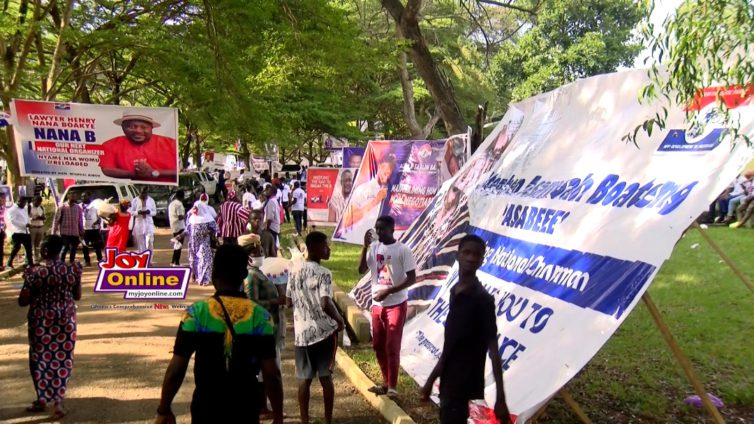 Materials depicting the interest of persons aspiring for various positions in the New Patriotic Party (NPP) have flooded the Ashanti regional delegates’ conference.

Banners and fliers were dominated by Vice President Dr Mahamudu Bawumia and that of Trades and Industry Minister, Alan Kyerematen, who are widely speculated to contest for the NPP flagbearer positions.

Though nominations are yet to open for various positions in the party, subtle campaigning is ongoing.

The conference venue was awash with fliers claiming to be sponsored by Alan News and Youth for Alan in support of Trades and Industry Minister, Alan Kyerematen.

One of the leaflets scripted: “10 things to know about Lawyer and Economist Alan Kwadwo Kyeremanteng” profiles the three-time flagbearer aspirant.

The other flier dubbed “The Alan News” features what looks like news headlines, and key among them reads, “Why Alan Cash will win the NPP Flagbearer race and defeat John Mahama 2024”.

One of the persons who support the Alan Kyeremanteng bid, Nana Prempeh, says, “no candidate has declared their intentions, they have fun clubs, and they are those sponsoring the branding”.

The grounds were also awash with T-shirts of Agric Minister, Dr Owusu Akoto Afriyie. It is speculated the former Kwadaso MP has an interest in the NPP flagbearership.

His supporters, mainly persons from the Kwadaso Constituency, said though Dr Afriyie is yet to declare any intention, they are calling on him to join the race.

At the grounds of the conference grounds were also banners with the picture of Dr Mahamudu Bawumia with the inscription ‘The People’s Choice’.

The Vice President who was invited for the occasion was represented by Fred Oware.

“2020, we did well though the target wasn’t meant. For 2024, he says he is looking up to the Ashanti Region that whoever you elect, he will work with him to ensure the party wins the elections”, he added.

Meanwhile, General Secretary, John Boadu says though there is a ban on all campaigns, declaration of intentions on billboards are tolerated.

Some banners of Mr Boadu himself were on display.

“Let no one start campaigning now because it can affect government. I have seen some pictures on display here, for that we can accept,” he said.

Other persons interested in positions at both the regional and national levels had banners all over the grounds.