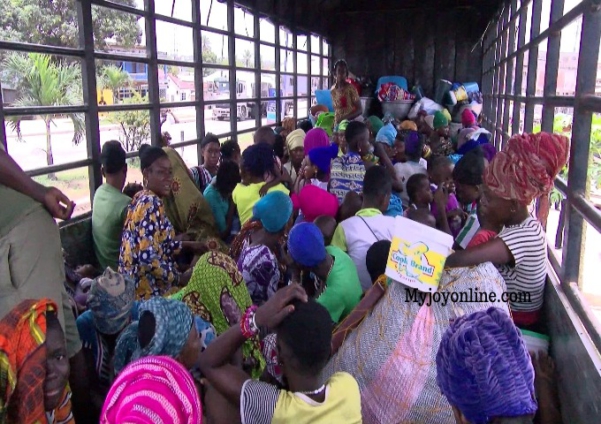 The Vice President, Dr. Mahamudu Bawumia has donated ¢500 to each of the stranded Kayaye (head porters) who were stopped at Ejisu in the Ashanti Region on their way to the Northern Region.

The head porters, numbering about 76,  had attempted to flee from Accra back to their hometowns in the wake of the President’s order for a partial lockdown in the Capital City and other parts of the country.

But their journey back home was unsuccessful as it fell within the lockdown time on Monday.

Their attempted mass crossover to the north was seen as a threat to stop the spread of the virus in the country, and they were thus stopped from proceeding by security officials, who returned them to Accra.

Despite the temporary provision of shelter for them by the Accra Metropolitan Assembly, many have raised concerns over the plight of the Kayayes under the current circumstance, as business activities in the heart of Accra have come to a halt.

It is in response of this that the Vice President has donated ¢500 to each of them to ameliorate their plight during the period of the partial lockdown.

The donation was made on behalf of the Vice President by the Minister for Local Government and Rural Development, Alima Mahama. She was accompanied by Dr. Sagare Bambangi , MP for Walewale and Mustafa Ussif, CEO of the National Service Secretariat.

Alima Mahama also revealed that President Akufo-Addo has directed that government assist all  Kayaye head porters by giving each of them ¢10 per day to buy food throughout the lockdown period.

Meanwhile the Vice President has also urged all Ghanaians to continue to observe the preventive measures of regular washing of hands with soap under running water, while they  observe the partial lockdown at their respective homes.

“While we stay at home to prevent the spread, let us continue to adhere strictly to all the preventive measures to avoid the spread of the virus,” he urged.

“Let us continue to wash our hands regularly with soap under running water, as well as constantly use alcohol-based hand sanitizers to sanitize our hands. We shall overcome, in shaa Allah,” he added.

DISCLAIMER: The Views, Comments, Opinions, Contributions and Statements made by Readers and Contributors on this platform do not necessarily represent the views or policy of Multimedia Group Limited.
Tags:
Dr Mahamudu Bawumia
Ejisu
kayayei
Lockdown in Ghana