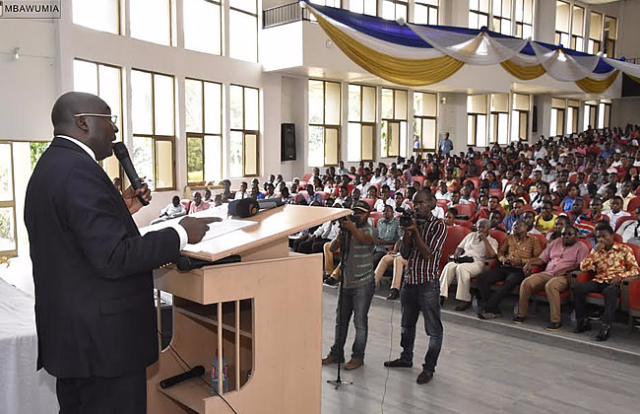 Dr. Bawumia laid out this plan during a Lecture on the topic – ‘High Graduate Unemployment and the Employment Embargo, What is the Solution’ to students of the Kwame Nkrumah University of Science and Technology (KNUST) during a Public Lecture organized by the Economics Students Association of the university on Tuesday.

He stated that the NPP's goal in the time being is to build the most people friendly and most business friendly, globally competitive economy in Africa.

The first key, according to Dr. Bawumia, to creating the needed jobs and transforming the Ghanaian economy is formalizing the economy. He noted that no developed economy could have reached their current status without formalizing their economies.

He indicated that a comprehensive National identification database with unique identifiers for each person and a well-functioning property address system are some of the pillars to formalising the economy.

He added that a Data Revolution was critical to Ghana’s development, saying that such a Revolution would involve linking databases across institutions such as DVLA, Police, Courts, Immigration, Revenue Agencies etc.

“All modern economies all formalized. Formalization makes the collection of taxes, discipline and job creation easier. The keys to formalizing an economy are the existence of a National ID System and a functioning Property Address System. The benefits of a national ID system or a unique identification number for residents and a well-functioning Property Address System are significant. Activities of residents with regards to taxes, loan applications, crime, job applications, housing, insurance, health, etc. are uniquely identifiable”, he said.

Dr. Bawumia also identified the movement from cash to electronic payments using mobile and other ICT platforms as another pillar to formalizing the economy.

The second key for Dr. Bawumia is financial inclusion – banking the unbanked.

“The financial system cannot develop to its potential and monetary policy cannot be effective if the majority of the population continues to be excluded from access to financial services. The importance and urgency of banking the unbanked is something that is clearly not appreciated by many governments. As well as formalizing the economy, it holds the key to reducing interest rates sustainably with the support of disciplined fiscal policy. This is because banking the unbanked increases the supply of savings in the banking system.”

Citing examples from various countries, Dr. Bawumia noted that a deliberate governmental policy was necessary to spur financial inclusion and that if achieved, will ensure that businesses can borrow at very low and stable rates to grow business and employ more people.

“Wide access to financial services in the developed economies increased the supply of savings in their banking systems and reduced the cost of borrowing”, he added.

The third key, according to Dr. Bawumia, is diversifying the export base of the country and deliberately pursuing policies to make Ghana the production hub in the sub-region to attract the needed industries and investment to create jobs.

The fourth key in the ten point plan is developing the mortgage market which, according to the NPP Vice-Presidential Candidate, holds the key to awakening the dead capital in Ghana’s property market and boosting growth and jobs.

He noted that developing the mortgage market requires finding a solution to the issues that bog land acquisition and streamlining the processes around the acquisition and development of property.

“From our Zongos like Nima, our inner cities like James Town to our well-developed neighbourhoods like East Legon in Accra, so many people do not have titles to land. Our people are sitting on very valuable property but without title to them. Finding a solution to this problem would jump start the mortgage market in a big way.

“Solving this problem would increase the supply of houses by the private sector, empower the poor who would be able to borrow against the collateral of their houses and start or expand businesses, and result in a housing sector led boom in the economy and higher tax revenue for government.

“A blossoming Mortgage Market, with the necessary structures and pillars, will see openings for several well-paying jobs which our youth can be beneficiaries of. The property market is perhaps one of the most labour intensive sectors and it is thus a critical cornerstone for an economy that seeks to win the war against employment”, he said.

The fifth key to ending the massive joblessness that confronts the nation today is putting in place a trade policy that encourages production, especially in key sectors Ghana has a competitive advantage in and one that utilizes tax policy to boost production and jobs instead of focusing on revenue to the detriment of production and jobs.

“Ghana should focus on providing the tax incentives for increasing production and generating employment. In the process revenue can be raised from corporate and income taxes. What we should not allow to happen is for the desire to generate revenue to kill businesses and cause unemployment”, he said.

Dr. Bawumia also stated that the institution of a tax credit incentive for businesses that employ fresh graduates will encourage the hiring of more youths and discourage the tendency of businesses to require ‘years of experience’ before they employing job seekers.

The sixth key to creating an economy of jobs is macro-economic stability and debt sustainability.

“With such large scale borrowing, government is crowding out the private sector which is unable to borrow to grow their business. Risk free Treasury bill rates are around 25% (up from 10.6% in 2011) and bank lending rates are on the rise because of excessive government borrowing. Lending rates are now above 30 percent.

“This development means it has become virtually impossible for business to borrow in the financial sector to grow and produce more. Government has today become the biggest competitor to private business and by its actions squeezing the little life left in them.”

He noted that while the economic slump the country faces has discouraged several investors from setting up businesses in Ghana.

According to him, these businesses prefer countries like La Cote d’ivoire and others with favourable economic conditions, a situation which has compelled government into introducing several desperate policies like astronomic increases in taxes.

These taxes Dr Bawumia noted, have affected businesses more negatively while the abolishment of several expenditure items, is hampering the development of the quality human resource needed by the country.

The four other critical keys to creating an economy of jobs which Dr. Bawumia explained were increased infrastructure investment to match growth in economy and to support production; addressing corruption, the cost of which is borne ultimately by businesses and citizens, prioritizing Agriculture and ensuring value addition to raw materials and investing in skills training and research.