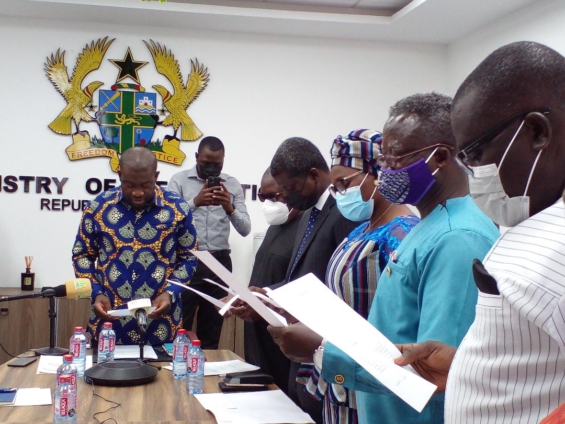 Information Minister, Kojo Oppong Nkrumah has urged the newly inaugurated Board of the Ghana Publishing Company Limited (GPCL) to consolidate the gains made so far and be an example of excellence of a state-owned enterprise (SOE) for publication of literary works in Ghana and West Africa.

The Minister charged the new board to complete processes towards the establishment of a Security Printing Project, which was started by the previous GPCL Board and embrace digitisation in its operations to improve efficiency.

At the inauguration of a seven-member board of directors in Accra on Thursday, Mr Oppong Nkrumah said the strength of GPCL weaned, but it had improved tremendously over the past four years.

He thus, tasked the board to sustain and consolidate the gains made by increasing the volumes of businesses received.

Additionally, he urged the GPCL to establish a fully-fledged publishing division and improve on the corporate governance culture to ensure profitability.

He pledged the full support of the Ministry and that of the State Interest and Governance Authority (SIGA), which supervises its operation to ensure that GPCL accomplished its constitutional mandate.

The Board Chair, Dr Daniel Owusu-Ansah, on behalf of the Board, thanked the President for the confidence reposed in them and pledged to building a modern publishing firm.

He gave the assurance that it would become a reference point in publications and distribution of literary works in the sub-region.

Other members of the board include David Boateng Asante, the Managing Director of GPCL, Paul Twum-Barimah, Madam Lawuratu Musah-Saaka, Isaac Kofi Appiah and Beatrice Barwuah.