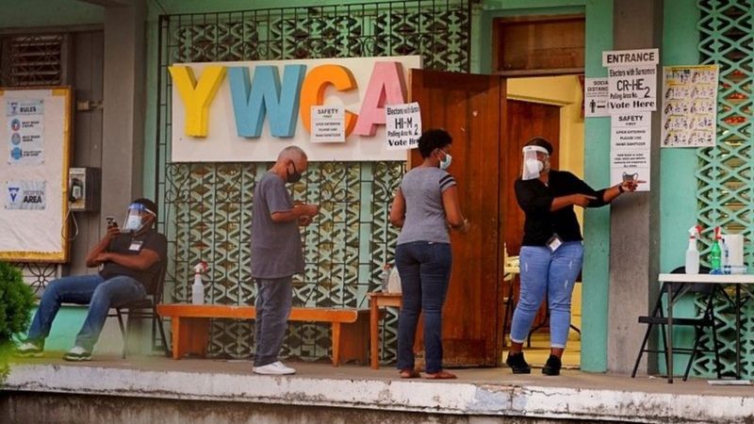 Voters cast their ballots for the 31-member National Assembly

After 12 years of being led by conservative Prime Minister Dean Barrow, the Central American nation of Belize will see a change of government after the general election was won by the opposition centre-left PUP party.

Mr Barrow was not running but the candidate for his United Democratic Party, Patrick Faber, has conceded.

Voters said that the economy was their main concern.

Belize is heavily reliant on tourism as a source of income. With travel severely curtailed by the coronavirus pandemic, Belize’s tourism sector has been badly hit.

The International Monetary Fund has predicted that the economy will contract by 16% this year.

“Belizeans, in impressive numbers, voted for a new beginning,” Mr Briceño said. “This 2020 is a call for our young nation to grow up, to face the challenges of our generation and to advance our peaceful, constructive and progressive revolution.”

Mr Faber congratulated Mr Briceño and spoke of the challenges ahead for the new leader in light of the pandemic and the destruction caused by the passing of Tropical Storm Eta.

Mr Briceño “will need all the support in order that he can see our great nation through the long road of recovery, not just from the recent floods, but from the impact and effects of the Covid-19 pandemic,” Mr Faber said.

During the run-up to the vote, Mr Briceño, who is 60, told voters that he was “mature enough” to “be able to come in and to fix [the] country”. Before becoming the leader of the PUP, he served as deputy prime minister and as minister of natural resources and of foreign trade.