American pop star Beyonce has given birth to twins, according to media in the US.

Entertainment Weekly, Us Weekly and People magazines confirmed the news, but the date of birth and gender of the babies are not yet publicly known.

Beyonce, who is married to rapper Jay-Z, announced her pregnancy in an Instagram photo in February – the most-liked post in history on the network.

The couple already have a daughter, Blue Ivy, aged five.

There has been no official confirmation of the birth from Beyonce and Jay-Z themselves. 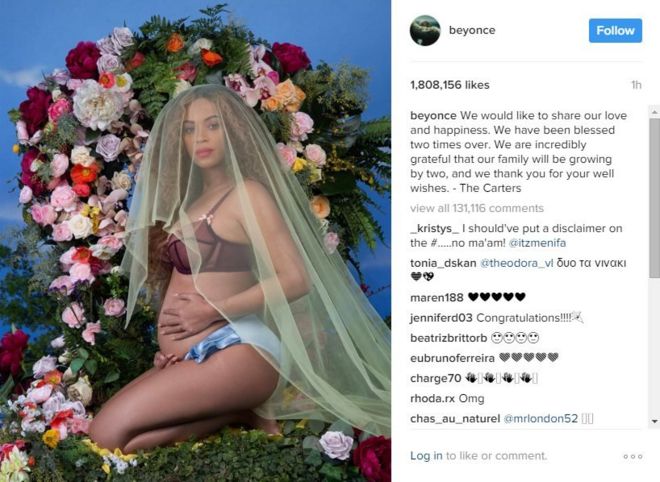 Other photos Beyonce posted after her pregnancy announcement showed her swimming under water, reclining on a bed of roses and sitting naked on a floral throne.

In one, the 'Lemonade' singer stood naked, cradling her belly with one hand and a breast with the other, next to the sculpted head of an Egyptian ruler.

Speculation about the twins' birth had grown in recent days after a woman was photographed entering a Los Angeles hospital on Friday holding a card that read "B + J".

Beyonce is the most-nominated star in the history of the Grammy awards, and her album Lemonade was the world's best-selling record of 2016.

She had been due to headline the Coachella music festival in California in April, but pulled out on her doctor's advice.

The twins' birth – if confirmed – comes only days after actor George Clooney and his wife Amal welcomed their own set of twins, Ella and Alexander.