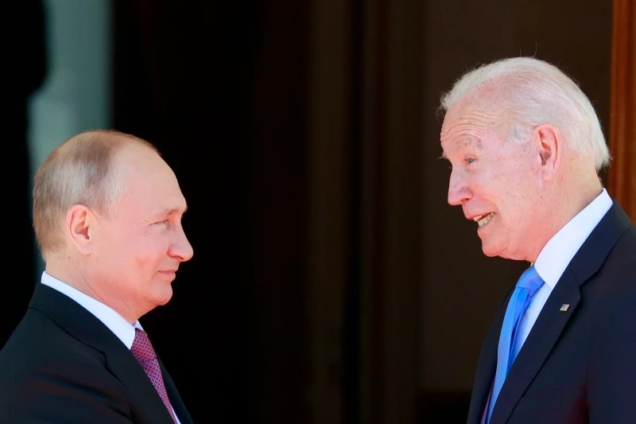 US President Joe Biden has said he would be ready to meet Russia’s President Vladimir Putin “if in fact there is an interest in him deciding that he’s looking for a way to end the war”.

Addressing reporters alongside French President Emmanuel Macron, he stressed Mr Putin had not yet done that.

The two men stressed they would continue to stand against Russia’s war.

The French leader made clear they would never urge Ukraine to make a compromise it considered unacceptable.

They were speaking as a senior Ukrainian official said that between 10,000 and 13,000 of its soldiers had been killed since the start of Russia’s invasion on 24 February.

Neither Ukraine nor Russia tend to release figures for casualties, and the remarks by presidential adviser Mykhailo Podolyak have not been confirmed by the Ukrainian military.

Last month, the most senior US general, Mark Milley, said around 100,000 Russian and 100,000 Ukrainian soldiers had been killed or wounded since the start of the war.

He added that the number of civilians killed could be “significant”. He also suggested that up to 100,000 Russian soldiers had been killed since the invasion.

In a video address on Wednesday, EU Commission head Ursula von der Leyen said that 100,000 Ukrainian troops had been killed.

However, a spokesperson for the EU Commission later clarified that this was a mistake, and the figure referred to those both killed and wounded. Ms von der Leyen had also spoken of 20,000 Ukrainian civilian deaths.

After their talks at the White House, the US and French presidents issued a joint statement pledging “continued support for Ukraine’s defence of its sovereignty and territorial integrity”, stepping up delivery of air defence systems and plans for an international conference on Ukraine in Paris on 13 December.

President Biden’s suggestion that he was ready to talk to the Russian leader came with a heavy caveat and his French counterpart said “we will never urge the Ukrainians to make a compromise that will not be acceptable for them.”

President Macron was speaking hours after Russian Foreign Minister Sergei Lavrov complained that European countries had offered nothing concrete so far in terms of mediation. “Macron, by the way, has been regularly stating over the last two weeks that he was planning a conversation with the Russian president,” he was quoted as saying, while adding that Russia had not had any signals via diplomatic channels.

Mr Lavrov named former US Secretary of State John Kerry as the kind of figure who had in the past been able to solve problems and engage in true dialogue.

DISCLAIMER: The Views, Comments, Opinions, Contributions and Statements made by Readers and Contributors on this platform do not necessarily represent the views or policy of Multimedia Group Limited.
Tags:
Joe Biden
Russia President
Russia-Ukraine War
US President
Vladimir Putin