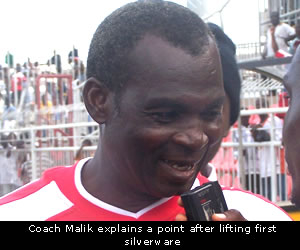 Head coach of the National U-23 football team, Malik Jabir has revealed plans to engage other African countries in a round-robin competition ahead of their qualifiers.

The Meteors team has been silent after failing to qualify for London Olympics in 2012 and gold medalist in 2011 All Africa Games  but the former Asante Kotoko player  believes  they will engage some north  Africa teams  soon in  some international friendlies.

Jabir who was speaking on Luv FM’s Sports Avenue disclosed he had been approached by an agent from Europe to play a number of international  friendlies with  some North African countries who are also about to begin building  their  Olympic national teams .

“All things being possible later  next week we might  meet to outline our programme  for the year . We  also have an agent from Europe who has just contacted me and we are yet to  settle down on a few teams that will involve Morocco, Egypt, Libya, and I think Algeria.”He said

Should the friendlies come to fruition, it would be a good starting point for the Meteors to assembly the best of materials to represent the country in future competion Under 23 competition.