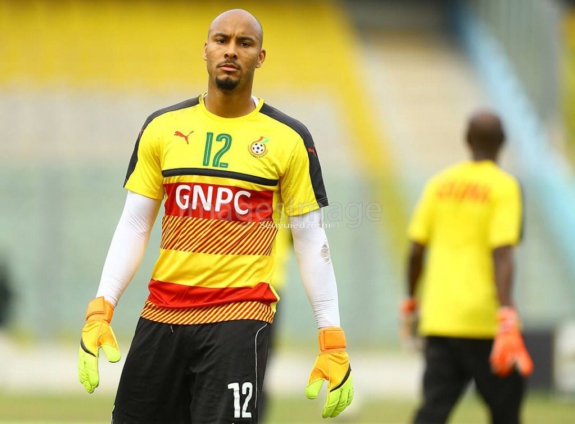 Adam Kwarasey is a former goalkeeper of the Black Stars

Former Black Stars goalkeeper, Adam Larsen Kwarasey, has stated that there is not a clear favorite at the moment for the number one goalkeeping spot in the national team.

Since the exploits of current Black Stars goalkeeper’s trainer, Richard Kingston, who manned the posts for Ghana between 1996 and 2010, there has been a real struggle to replace the shot-stopper.

Wollacot manned the posts for Ghana at the disastrous Africa Cup of Nations in Cameroon, where Ghana exited without winning a game. He was also the man in charge when the Stars sealed World Cup qualification at the expense of Nigeria following two draws in Kumasi and Abuja.

Ofori, Lawrence Ati-Zigi of St gallen and  Eupen’s Abdul Manaf Nurudeen, who recently received plaudits for saving two penalties in Ghana’s win over Chile in the Kirin Cup competition, are all fighting for the number one spot at the World cup.

Kwarasey, who directly succeeded Kingston till his national team exit in 2017, says the performances of the goalkeepers are pretty even with no clear favorite.

“I have a feeling that they’re very even, there’s not a clear number one. Obviously, Wollacott played the tournament – I didn’t really know him before the tournament, so that’s what I’ve seen of him. I talk to him [Ati-Zigi] sometimes. We text, I’ve never met him but it’s just about keeping up.

“I played with him [Richard Ofori] as well, he’s a good goalkeeper. He had some injuries but I have a feeling if he’s fit and if he’s where he is supposed to be, he might be the one I’ll have played with,” he told JoySports in an exclusive interview.

Kwarasey was started in goal against USA in Ghana’s opening game at the 2014 World Cup in Brazil but was dropped for the subsequent games against Germany and Portugal.

He was later called up for the 2015 AFCON in Equatorial Guinea but excused himself from the 2017 AFCON, citing injury.

The former Stromsgodset goalie is confident the new Black Stars technical team headed by Coach Otto Addo, with support from Didi Dramani, Chris Hughton and George Boateng, is capable of doing better than the 2014 world group stage exit in Qatar later this year.

“Definitely, I think that will help because I think the preparations – they’ll probably put some demands, and they have some type of expectations on how things should be done.

Was such a pleasure speaking to former Black Stars goalkeeper 🇬🇭Adam Kwarasey on a wide range of subjects.

“I think also their methods are also probably more similar to what the squad is used to in their clubs and that is a plus.”

The current Sporting Director of Fc Oslo speaks to JoySports’ George Addo Jnr in an exclusive interview that airs on July 5, 2022 on the JoyNews and Joy Prime channels.

DISCLAIMER: The Views, Comments, Opinions, Contributions and Statements made by Readers and Contributors on this platform do not necessarily represent the views or policy of Multimedia Group Limited.
Tags:
Adam Kwarasey
Black Stars
JoySports
Qatar 2022 World Cup