Blast at UN building in Nigeria 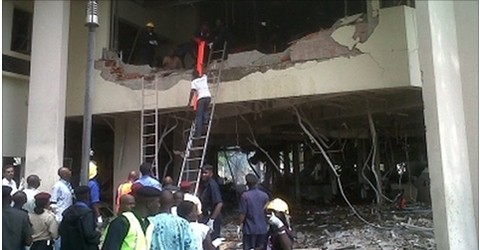 A car bomb attack has struck the UN building in the Nigerian capital Abuja, killing at least three people.

The powerful blast wrecked the bottom floor of the building. Three are confirmed dead at a local hospital and 60 are injured, some critically.

A UN official in Nigeria, who spoke to the BBC on condition of anonymity, said the UN had received information last month that it could be targeted by Islamist group Boko Haram.

Security was stepped up in response.

A car bombing at police headquarters in June was blamed on Boko Haram, a group which wants the establishment of Sharia law in Nigeria.

There has been no claim of responsibility for Friday’s attack, but government officials have blamed “terrorists” for the bombing, says the BBC’s Bashir Sa’ad Abdullahi, who is at the site of the explosion.

Witnesses said the blast happened after a car rammed the front of the building after crashing through two security barriers.

Nigeria’s Minister of State for Foreign Affairs, Viola Onwuliri, told the BBC she had visited the building and seen “the shock on people’s faces”.

“This is not an attack on Nigeria but on the global community,” she said. “An attack on the world.”

The building is the UN’s main office in Nigeria, where all its agencies are based, the unnamed UN official told the BBC.

The official said security had been increased at all UN offices in Nigeria following the intelligence warning of a possible attack.