A suicide bomber killed 29 people Wednesday in Kabul, the latest in a string of attacks to rock the Afghan capital since the start of the year.

Another 52 people were injured in the blast, according to Ministry of Public Health spokesman Wahid Majroh.

A spokesman for Kabul city police, Basir Mojahid, said the attacker was trying to reach the capital's Sakhi shrine, where people had gathered to celebrate the Persian new year, known as Nowruz. 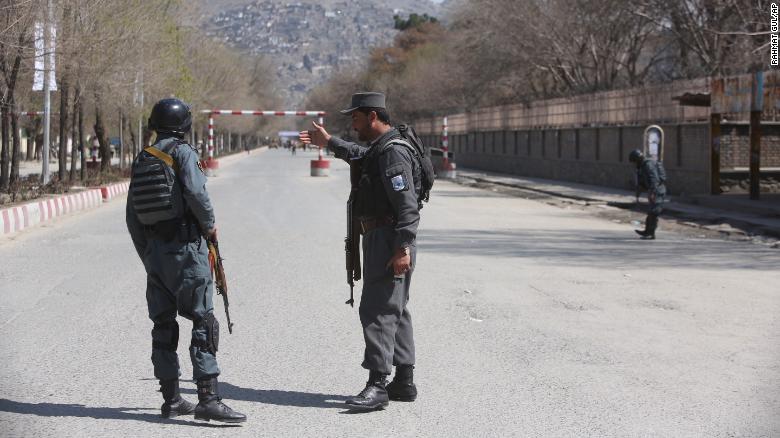 Police patrol the streets after a blast in front of Kabul University on Wednesday.

A series of attacks in the capital this year had already fueled doubts over the Afghan authorities' ability to keep people safe.

Less then two weeks ago, a suicide bomber killed at least nine people when he detonated his device at a security checkpoint.

The previous month, several people were killed and injured in a suicide attack in the Shashdarak area of Kabul, not far from the Kabul Green Zone where many diplomatic compounds are located.

In January, Taliban gunmen stormed the Intercontinental hotel in Kabul, killing 22 people. Days later, the group claimed responsibility for an attack outside a hospital in which militants detonated explosives packed inside an ambulance. Nearly 100 people were killed in that attack.

The Afghan government announced on February 28 it would be willing to recognize the Taliban as a legitimate political party as part of a potential ceasefire agreement with the Islamist militant group.

The group has not publicly responded to the proposal.

During a trip to Kabul last week, US Defense Secretary James Mattis said that some factions of the Taliban had expressed interested in pursuing peace talks with the Afghan government.

Before reaching the shrine, the attacker was identified by security forces and blew himself up in front of Kabul University, Mojahid said. The blast happened about 12:40 p.m. local time (4 a.m. ET).

ISIS claimed responsibility for the blast in a statement, saying an attacker it named as Abu Talha al-Peshawri had detonated his explosive vest among "polytheists" gathering to celebrate Nowruz.

The US Ambassador to Afghanistan, John R. Bass, condemned the attack as "shameful" on his official Twitter account and said the United States was committed to working with the Afghan authorities "to secure peace in the year ahead."