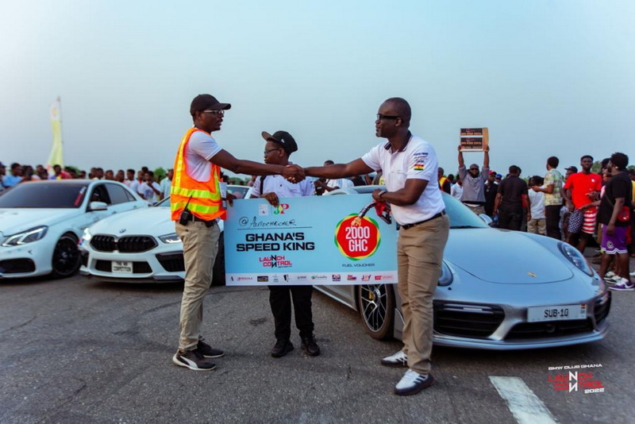 Since its inception in 2019, Launch Control has steadily grown to become one of West Africa’s biggest motorsports events. Motorsports simply refers to a competitive activity that involves motorized vehicles, typically including cars and motorbikes.

One of the events that has differentiated itself the most from the December schedule of activities in Ghana is Launch Control by the BMW Club of Ghana.

Since its inception in 2019, Launch Control has steadily grown to become one of West Africa’s biggest motorsports events. Motorsports simply refers to a competitive activity that involves motorized vehicles, typically including cars and motorbikes.

The event has steadily built an audience drawn from both car and bike enthusiasts. A major part of showcasing car culture is the drag race event, where vehicles in different power segments compete against each other in a safe race environment.

The 2022 competition, which happened on 26th December at the Afienya Airstrip, was the biggest event so far, attracting visitors and participants from neighbouring countries including Nigeria, Togo, and Cote d’Ivoire. It also exceeded attendance records, drawing over 5,000 spectators. In addition to showcasing and giving spectators an up-close and personal experience with the most exclusive cars and bikes in the country, selected spectators, including children, were given the opportunity to experience rides in some of the most powerful cars.

Mr. Lloyd Ashiley, president of the club, said, “Ghana has always had a vibrant car culture. One only has to take a look at pictures of our fathers and grandfathers, and you’re sure to find a picture where they’re standing by a car. Our objective with Launch Control is to be the pulse of that car culture and show the continent and the rest of the world that vibrant culture and introduce more people to it, in a special, safe environment.”

“We realised that a lot of people were bringing very fast cars in and had nowhere to really test the power. As part of our commitment to dissuade people from racing recklessly on main roads, we wanted to provide an environment for the owners of these cars and bikes to, not only experience the full power of their cars, but also compete against others of similar capacity where possible,” said Dr. Nana Asante Appiah, Patron of the club.

Mr. Kojo Farhat, who owns and drives the now iconic blue BMW F90, was crowned the winner and Street King in 2019 and retained that title in 2020. In 2021, the event attracted further curiosity from even more high-profile car owners who also entered the competition, including a Porsche 911 Turbo S, driven by Mr. Chris Kusi-Appiah of Autochecker, who was crowned the Street King title for 2021. Mr. Daniel Ashrifi, who also runs an academy that teaches people how to ride, was crowned Ghana’s Speed Prince after winning the coveted motorbike race final.

The 2022 edition, codenamed LC 22, therefore drew more excitement as spectators wanted to see the BMW F90 that had been Champion in 2019 and 2020 compete against the Porsche 911 that won in 2021.. At the end of the day, the Porsche, once again expertly driven by Mr. Chris Kusi-Appiah triumphed over the BMW F90 to be crowned Ghana’s Street King.

Before that race happened however, the crowd was treated to even more surprises that included the arrival of several more unexpected high-profile cars and owners including the McClaren 720s. Mr. Ibrahim Mahama also came with an array of cars including a Porsche 911 992.1 highly tuned by German tuners MTM, and Mercedes low production AMG GTr.

The event attracted media and blog attention across the sub-region and has seen the biggest response so far since its inception. On what’s next for the event, the Vice President of the club, Mr. Kwesi Crabbe, said, “We have already received invitations from our neighbouring countries to participate in their events with our speed king. The idea is to make Launch Control a sub-regional event, pulling in competitors not just from Ghana but also from Nigeria, Togo, and Cote d’Ivoire.

Motorsports is an undeniable part of the Ghanaian and African narrative. People love their cars and bikes. The idea behind our starting Launch control was to provide a safe environment for people to experience the power of their vehicles and also show what their vehicles can do. In other developed places, they have dedicated tracks and drift pads. The idea behind Launch Control is to pave the way for Ghana to also achieve those heights. We have slowly become one of Ghana’s biggest events, and next year promises to be even bigger. Buckle up!”

JP, the only fuel station that offers Ron 97 premium fuel, the highest petroleum standard in Ghana, was the official sponsor of the event, which is now Ghana’s biggest car and bike fest since independence. The event was also sponsored by Pergola Creations, Abel, Bloom, PowerSol, Ash Motors, Vanguard Insurance, Akwaaba Foundation, and Multimedia.

DISCLAIMER: The Views, Comments, Opinions, Contributions and Statements made by Readers and Contributors on this platform do not necessarily represent the views or policy of Multimedia Group Limited.
Tags:
Afienya Airstrip
BMW Club of Ghana
Motorsport