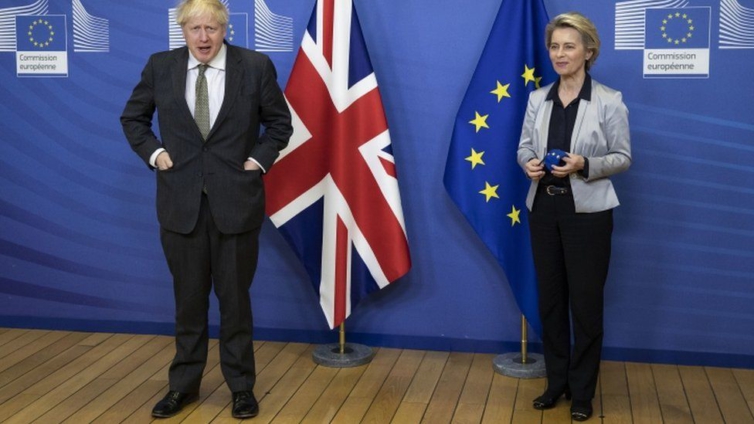 The EU has published contingency plans in case of the possible collapse of Brexit trade talks with the UK.

The plans aim to ensure smooth UK-EU air and road travel, as well as allowing the possibility of fishing access to each other’s waters.

They come after talks between UK PM Boris Johnson and EU chief Ursula von der Leyen aimed at ending a deadlock over the deal ended without agreement.

The UK is due to stop following EU trading rules on 31 December.

The UK left the EU at the end of January this year, but a transition period of 11 months followed to allow the two sides to try to negotiate a deal.

The prime minister’s spokesman said such a statement from the EU had been expected and that the government had already set out its own plans in the event a trade deal could not be reached.

The main obstacles continue to be access to fishing waters, rules about subsidising businesses and how any new deal would be policed.

A statement by the European Commission – the EU executive – published on Thursday said there was currently “significant uncertainty” about whether a deal would be in place by 1 January.

“Our responsibility is to be prepared for all eventualities, including not having a deal in place,” Ms von der Leyen said.

Some sectors would be disproportionately affected, the commission said, adding that it was proposing four contingency measures “to mitigate some of the significant disruptions” if a deal were not in place:

Reacting to the plans, Boris Johnson’s spokesman said the UK government would look “very closely at the details” and that negotiators were “continuing to work to see if the two sides could bridge the remaining gaps”.

The spokesman added that the government “had been clear throughout it would not agree to anything that did not respect UK sovereignty”.

The European Commission has until now resisted calls from EU member states to publish these plans, partly because it did not want to jeopardise further the already perilous trade talks.

The thinking was that the UK may view any EU contingency plans as rather palatable and encourage them to pursue a path to no deal. Certainly, the proposal that planes and lorries would keep moving would appear to remove an element of drama from what happens on 1 January.

And on fishing – such a totemic issue in the wider talks – the message is that this would protect coastal communities in the face on growing uncertainty.

But dig deeper, and the EU olive branch is dependent on the UK accepting key terms, including agreements on the increasingly famous “level playing field” – the very subject which is proving so divisive in the seemingly deadlocked trade talks.

The state of play with the talks

UK Foreign Secretary Dominic Raab said it was “unlikely” the negotiations would be extended beyond Sunday, while Paymaster General Penny Mordaunt said the UK was “working tirelessly to get a deal” but could not accept an agreement at any cost.

Ms von der Leyen said the EU was willing to grant the UK access to the single market “but the conditions have to be fair… for our workers and our companies”, adding: “This fine balance of fairness has not been achieved so far. We will take a decision on Sunday.”

EU leaders will be briefed about the talks at a summit in Brussels later on Thursday, although Brexit is not on the official discussion agenda.

Separately, the European Commission has confirmed reports that a ban on travel to the EU because of Covid-19 levels, now applying to non-EU countries, could be extended to UK visitors from 1 January.

Currently only eight countries with low Covid rates are on the approved list for free travel and there are no plans to add the UK to that list.

But EU member states have control over their own border restrictions and could choose to have their own individual travel corridors and allow British visitors in.

Meanwhile, France’s minister for Europe, Clément Beaune, warned that visas might be required for UK citizens who plan to stay in the EU for more than three months. But, he added, the matter was still being negotiated.