Brexit: UK has 12 days to set out plans

Boris Johnson has 12 days to set out his Brexit plans to the EU, according to Finland's prime minister.

Antti Rinne said he and French President Emmanuel Macron agreed the UK needed to produce the proposals in writing by the end of September, adding if not, "then it's over".

A Downing Street source said: "We will continue negotiating and put forward proposals at the appropriate time."

Mr Johnson has said a deal is possible at a crucial summit of EU leaders on 17 October, but he has insisted Brexit will happen by the 31 October deadline, even if a deal is not agreed.

The UK government said talks with the EU have been making progress since Mr Johnson came into No 10 in July.

It said it had put forward "a number of proposals" as alternatives to the Irish border backstop – the policy aimed at preventing the return of a hard border on the island of Ireland and a key sticking point in former PM Theresa May's Brexit deal.

But Mr Johnson has repeatedly refused to reveal details of the proposals in interviews, saying he did not want to negotiate in public.

The EU has continued to criticise the UK for not putting any plans in writing.

Earlier, the European Commission President, Jean-Claude Juncker, said a meeting with Mr Johnson on Monday had been "constructive".

But he said until proposals had been put forward, "I will not be able to tell you, looking you straight in the eye, that any real progress has been achieved".

Mr Rinne spoke to reporters after a meeting with the French president in Paris on Wednesday.

He said: "We both agreed that it is now time for Boris Johnson to produce his own proposals in writing – if they exist.

"If no proposals are received by the end of September, then it's over."

The Finnish PM intends to discuss the new deadline with the President of the European Council, Donald Tusk, and Mr Johnson in the coming days, but the position has not yet been agreed with other EU nations.

Commons leader Jacob Rees-Mogg insisted the prime minister was on course to deliver a "fundamentally different" Brexit deal to ensure the UK leaves on October 31.

He told a Telegraph event that to achieve such an outcome the government had to "listen very carefully to what the DUP says". 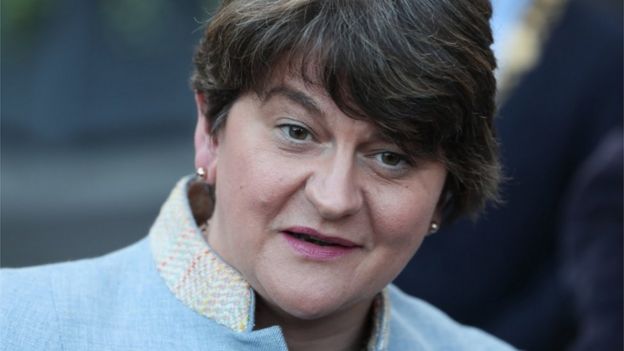 On Wednesday, DUP leader Arlene Foster told business leaders in Dublin that she wanted a solution to Brexit that does not affect Northern Ireland's constitutional position.

Mrs Foster – whose party's support had until recently given the Conservatives a majority in Parliament – said a Brexit deal "will not be achieved that involves a backstop – whether it is UK-wide or Northern Ireland specific".

The whole of the UK had to leave the customs union and single market, she said.

But she added that the DUP was prepared to "look at Northern Ireland-specific solutions achieved with the support and consent of the representatives of the people of Northern Ireland". 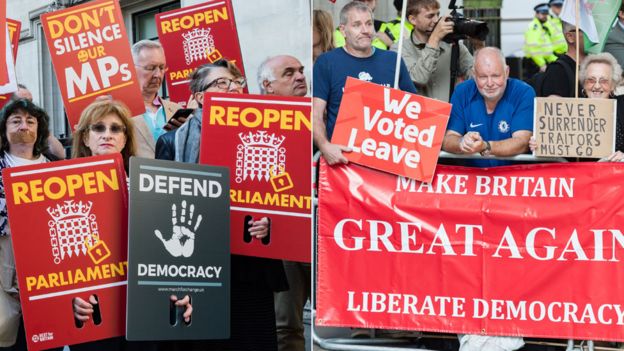 Protesters outside the UK's Supreme Court in London

It comes as the legal battle over the suspension of the UK Parliament is to go into a third day at the Supreme Court later.

The UK government is arguing the decision to prorogue Parliament was a political matter and not for the courts to "design a set of rules" around it.

But campaigners say the move was used "for an improper purpose" – to stop MPs scrutinising Mr Johnson's plans in the run up to Brexit on 31 October.

The prime minister prorogued Parliament earlier this month for five weeks, with MPs not scheduled to return until 14 October.

Mr Rees-Mogg, who travelled to Balmoral to seek the Queen's approval over the move, said it was "nonsense" to suggest she was misled over the decision.