‘Bring it on’ – Counsel for NDC National chairman ‘welcomes’ prosecution

Counsel for NDC National Chairman has welcomed the state’s decision to prosecute his client, Samuel Ofosu Ampofo, charged with conspiracy to cause harm.

“They are welcome”, legal practitioner, Victor Adawudu, said on Joy FM’s Top Story Monday, before adding, the trial will “not go anywhere”.

The trial, which begins Tuesday, will be the first-ever time a sitting party chairman is facing prosecution.

Samuel Ofosu Ampofo, seen as a soft-spoken politician, was heard talking tough in a tape that leaked in February.

The NDC Chairman while addressing party communicators, allegedly okayed politics of insults and revealed political plans to create a sense of insecurity ahead of the 2020 elections.

He has flatly denied making comments while the party’s 2020 flagbearer, John Mahama, has tried to rationalise portions of his comments contained in the tape.

Some had believed that beyond the governing party scoring political points, the saga would not travel the distance of prosecution.

The Attorney-General has signalled it will, as it opens a case that Samuel Ofosu Ampofo should be convicted for conspiring to assault a public officer in addition to conspiracy to cause harm. 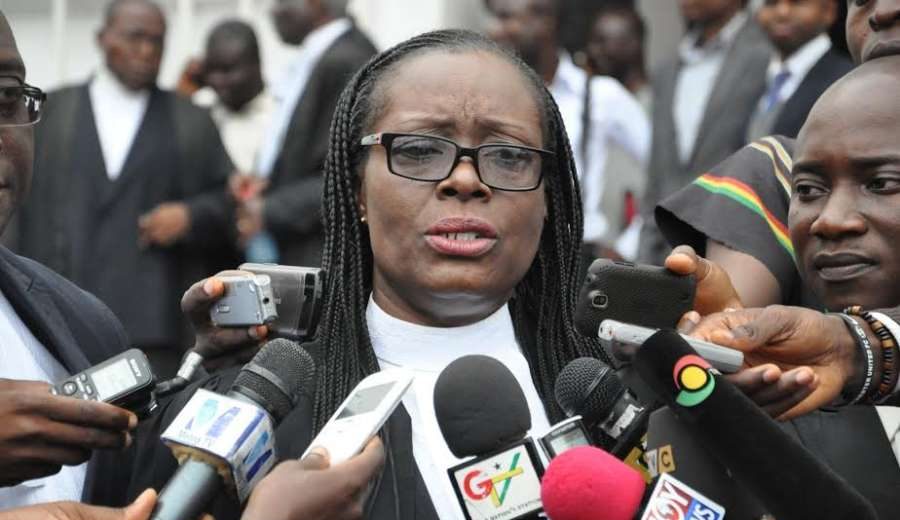 Photo: Gloria Akuffo is Attorney-General and Minister of Justice

The Deputy National Communications Officer of the party also faces the same charges after he publicly admitted the party chairman made the comments attributed to him.

Despite narrating his client’s consistent cooperation with the Police since their interest was piqued, Victor Adawudu has expressed surprise at the escalation.

“I didn’t expect this will go anywhere,” he said and predicted the state will struggle to secure conviction.

“For us, there is nothing criminal in that tape,” he maintained his client’s innocence. The legal practitioner would, however, not rule out the state finding difficulties producing evidence beyond what the tape provides.

Photo:NDC Executives accompanied Ofosu Ampofo [middle] to the CID headquarters where he was granted ¢400,000 bail with two sureties.

These pieces of evidence, if they exist, will have to be supplied to the accused, he explained the court process.

This case, he said, was his client’s first-ever “brush” with the law, Victor Adawudu pointed out his client’s comportment and stay-away-from-trouble record.

Victor Adawudu has also endorsed a party statement calling on supporters to mass up at the Accra High court for the trial.

It is a notice that is not expected to go unheeded by supporters of Ghana’s largest opposition. Samuel Ofosu Ampofo’s visit, on March 4, 2019, to the Police Headquarters in Accra, where he was first charged, attracted a throng.

The second coming of the supporters is “very necessary,” counsel for the accused hinted at the political nature of the trial.

On the face of the law, this case is much ado about nothing but this case is also political and so “anything can happen,” Victor Adawudu said.

This is the second time in 12 months that a national executive of the opposition NDC has been charged with a criminal offence.

In March 2018, deputy NDC General Secretary Koku Anyhidoho was charged with treason after he charged “there will be a civil revolt” and drew linkages to the country’s coup d’etat history.

This was following Ghana’s ratification of a controversial military agreement with the United States, which the NDC demonstrated against.

But in August 2018, the state dropped all charges and said it was disinterested. With the interest in prosecuting Samuel Ofosu Ampofo shaping up, there is some scepticism that it will not falter.