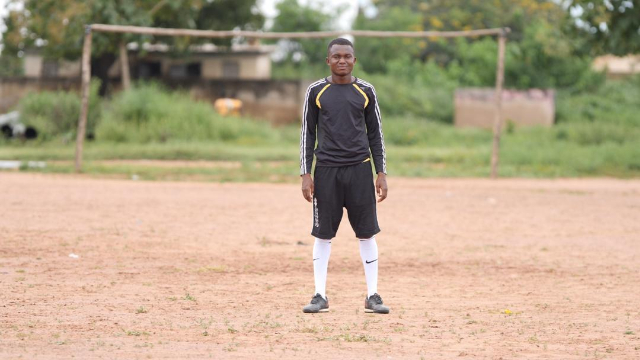 Innocents Yeboah-Num has made the six finalists selected by Arsenal FC and WorldRemit for new “Future Stars” youth coaching programme.

Innocents founded Madonna Sporting Club in Abease in the Pru West District of the Brong Ahafo Region and he is  Passionate about football.

He has been teaching under 12, under 15 and under 17 teams for the last seven years.

A panel of judges from Arsenal Football Club and its official online money transfer partner, WorldRemit selected the six coaches from across Africa who will now compete in a public vote on futurestars.worldremit.com for the chance to attend an exclusive training programme with Arsenal Soccer Schools in London – fully sponsored by WorldRemit.

A key part of the successful coach’s training at Arsenal will focus on how they will use the opportunity to build a lasting legacy in their home country. The finalists have therefore been selected based on the strength of their existing contribution to the community as well as their plans and ability to pass on their new skills on their return home.

The six coaches were chosen from a shortlist of 25 individuals who were selected by the judging panel earlier this month. One in six of the 25 shortlisted coaches were women and, as the programme moves into the final selection phase, Tersia Davids from South Africa becomes the one woman amongst the six finalists to face the public vote.

Simon McManus of Arsenal Soccer Schools said: “Arsenal has the most successful women’s side in England and is actively involved in encouraging greater participation from females in the game regardless of age. We were very impressed by the work that all these coaches were already doing in their community and the work of the women coaches further emphasizes the positive impact that encouraging more women to get involved in coaching can have. We hope that their success will encourage more women to follow their lead.”

Andrew Stewart, Managing Director Middle East & Africa at WorldRemit said:  “Our business is all about helping our customers’ financial support for their community to go further. We hope that by shining a spotlight on the way these coaches are using football to benefit their community, we can help their efforts to go even further still.

“The power of sport to bring communities together and create positive social change was one of the key reasons for entering into a partnership with Arsenal. This programme has highlighted just how powerful sport – and our partnership – can be and the immense potential in this area. This is something we are now looking to build on further.”