Bruno Fernandes will take penalty again ‘without fear or dread’ 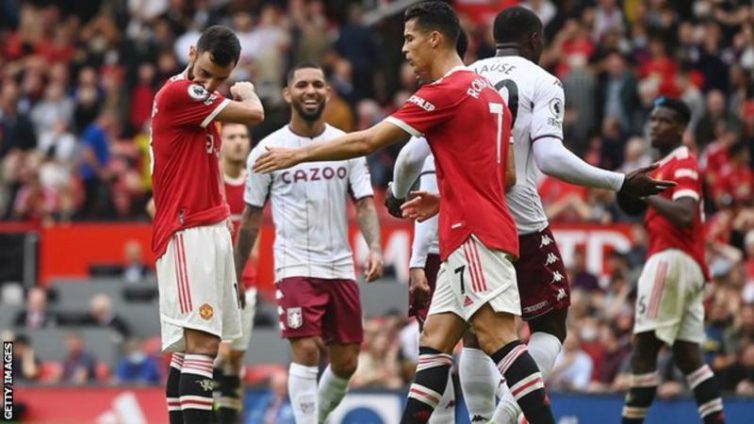 Manchester United midfielder Bruno Fernandes says he will step up for a penalty again “without fear or dread” after missing against Aston Villa.

Fernandes hit his kick over the bar in stoppage time at the end of Saturday’s 1-0 Premier League home defeat.

But he tweeted: “I once again took the responsibility given to me almost since [the day] I joined United and I will take it again without any fear or dread whenever called upon.”

Kortney Hause had put Villa ahead in the 88th minute at Old Trafford on Saturday, but then handballed inside his own area, and referee Mike Dean awarded United their first penalty of the season.

Boss Ole Gunnar Solskjaer had said before the match that his team was not getting penalties when they should be.

Fernandes added: “Thank you for all your support after the final whistle! Hearing you chant my name in the stadium was very emotional.

“I will come back stronger for me because these are the standards I hold myself to.”

No excuses for my penalty miss today. I’m my biggest critic but as always I’ll use it to drive me forward. More than my disappointment though, the team’s loss today is the most important. I’ll be ready next time. pic.twitter.com/tTBgURne8B

There had been talk in the season build-up as to who would be United’s penalty taker after they signed Cristiano Ronaldo.

But even with his miss on Saturday, Fernandes still holds a better penalty record at club level. He has a 90.7% success rate after converting 39 of 43 club spot-kicks, while his Portugal teammate Ronaldo has a rate of 85% after scoring 125 from 147 penalties.

The defeat ended United’s unbeaten league run and came three days after they were knocked out of the Carabao Cup by West Ham.

A victory over Villa would have seen them top the league table after Chelsea lost to Manchester City and Liverpool drew at Brentford.