Budweiser, the “King of beers” is here 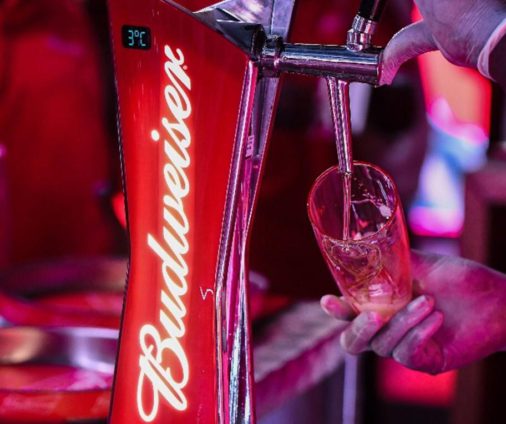 Budweiser, the king of beers and the world’s most valuable beer brand has come to Ghana to take its throne. It thrilled patrons with BudxGhana on 27th November 2021.

BudxGhana was about good music, art, culture, fun games, interactions, and great tasting cold beer for legal drinking age consumers all night. Patrons were also presented with a series of performances from some of the biggest and best talents in Ghana and Southern Africa. They had the opportunity to hang out with their favorite stars who were in attendance.

The night started with a dance performance from Dance God Lloyd & the DWP Crew followed by Bernard the magician with intriguing magic tricks. Camido and Major Skyscraper continued with amazing art and music. Black Sheriff, Afia and R2Bees’s thrilling performances afterward left patrons dancing on their feet for several hours.

El Mukuka from Zambia delivered a mind-blowing collection perfected by an energetic performance by Caitlin de Ville from South Africa.DJ Vyrusky took over and gave fans their favorite hit songs with patrons dancing all night long leaving them with unforgettable experiences and stories to tell.

BudxGhana’s engagement zone had the Budweiser throne where patrons could sit and take pictures, 360 degrees camera to take unlimited pictures, and a game center with video games and a pool table.

Celebrated Artists who attended BudxGhana included Davido, Reggie Rockstone, Abeiku Santana, and a host of others.

As the King of Beers, Budweiser inspires socialization, fun and will be introducing some excitement into the Ghanaian market as the official sponsor of the English Premier League and Spanish LaLiga.

Patrons who were not summoned were part of the fun by watching live streaming on GH One from 9:30 pm.

Budweiser is a product of Accra Brewery PLC.