Buju Banton sings of the only law to obey in the world - MyJoyOnline.com 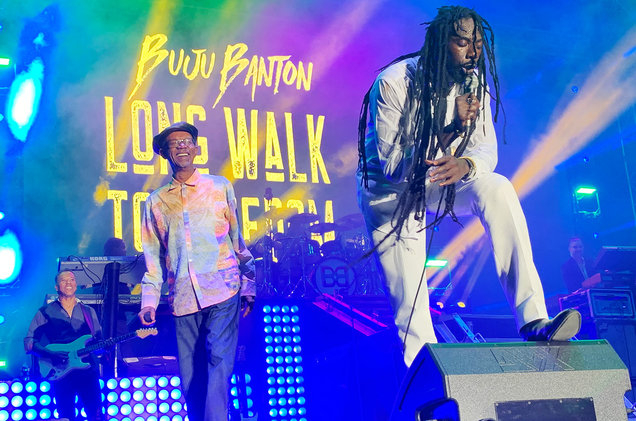 “Man is born free and everywhere he is in chains.”

Jean-Jacques Rousseau’s opening words captured in his thoughts of ‘The Social Contract’, signals the limitations of man despite the strings of freedom available.

If there be any human creation that strongly chains man, then surely it is the chain of law.

Proponents of rule of law have argued that without law, the world will become a jungle of prey and predators and this argument cannot be disregarded.

Laws are ‘necessary evils’, but can one obey all the laws that stare one in the face?

After spending about seven years of his life behind bars and returning home to a heroic welcome, Reggae and Dancehall heavyweight, Buju Banton, has proposed the only law humans must obey.

Surely, this is a public figure who has proven that he cannot obey all the laws created for man and by man.

In his first song titled ‘Price to pay’, released after gaining his freedom, the singer quizzes…

“…Now on my lonesome journey, a few things in life concern me

The other is how we live it? “

Buju Banton continues to sing about the only one law he believes human beings should obey on the face of the earth.

“…Let no one stand in your way

There’s just one law to obey

And protect your sanity…”

It is amusing to note that Buju Banton, a man who has had his morality questioned, sings of morality and instructs humans to religiously obey the law of morality.

Though the definition of morality and its boundaries are not cast in stone, universally accepted moral standards do apply across the world.

Jamaican historian and Garvey scholar, Professor Rupert Lewis, is one stern critic of the musician and has questioned Buju Banton’s morality.

He is reported to have even condemned the usage of the theme ‘Long Walk to Freedom’ for the concert by the artiste’s team to celebrate his freedom after leaving jail.

Professor Rupert Lewis fumes at the equation of the singer’s release from prison with Nelson Mandela’s after a decades-long fight against apartheid in South Africa.

He is reported to have said in an interview with The Gleaner that the appropriation of Mandela’s Long Walk to Freedom’ is unfortunate because the former South African leader represented a collective struggle while Buju Banton’s merely struggles for personal freedom.

The Grammy award-winner faces a stronger opposition to his claim to morality from Health Minister of his country.

Dr Christopher Tufton, seems appalled by the artiste’s failure to acknowledge his wrong and make a public pledge to lead the fight against drug abuse and trafficking.

Can Buju Banton with his dented public image win his morality fight and further instruct humans to obey its law thereof?