Burns Strider case: Clinton says she should have fired adviser

Hillary Clinton has admitted that she should have fired an adviser accused of sexual harassment during her 2008 presidential campaign.

Burns Strider was initially docked pay and told to seek counselling but was later fired from a campaign group after again being accused of harassment.

Mr Strider has not commented on the allegations.

It has prompted some speculation that she was seeking to bury her apology in the storm of media coverage around the address.

What is the allegation?

The 30-year-old woman who made the complaint shared an office with Mr Strider, the New York Times said when it reported on the claims last week.

The newspaper said that, according to three former campaign officials, the unidentified staff member told a campaign official that Mr Strider had rubbed her shoulders inappropriately, kissed her on the forehead and sent suggestive emails. 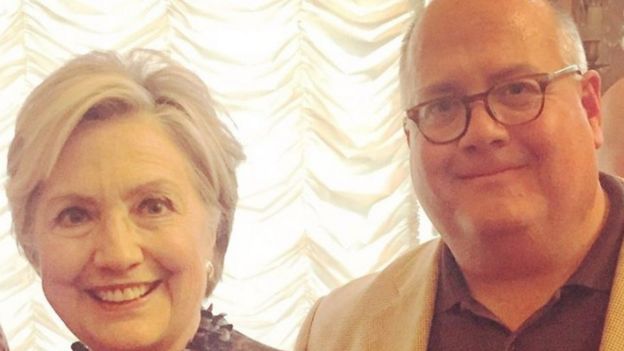 When her complaint was investigated, two advisers, including her campaign manager, recommended Mr Strider be fired, reported the New York Times.

But Mrs Clinton instead decided to send him to counselling sessions he never attended, according to the report.

The young woman was moved to another job within the campaign.

The matter has raised questions about Mrs Clinton's judgement and stated commitment to women's advancement.

What did Clinton say?

In her lengthy Facebook statement, Mrs Clinton says: "I'm being asked as to why I let an employee on my 2008 campaign keep his job despite his inappropriate workplace behaviour.

"The short answer is this: If I had it to do again, I wouldn't."

She says she understands the scrutiny of her decision to retain Mr Strider given her work to "support and empower women".

Mrs Clinton then goes on to explain her reasoning in detail.

She decided to do so, she says, "because I didn't think firing him was the best solution to the problem.

"He needed to be punished, change his behaviour, and understand why his actions were wrong. The young woman needed to be able to thrive and feel safe.

"I thought both could happen without him losing his job," Mrs Clinton writes.

She says she has "reached out" to the woman in question.

"The fact that [she] felt heard and supported reinforced my belief that the process worked – at least to a degree," Mrs Clinton writes.

But she points out that the events took place long before the "seismic shift" in social attitudes towards sexual harassment.

Mr Strider was Mrs Clinton's faith adviser and has continued to send her scripture readings over recent years, the New York Times said.

After the story first emerged last Friday, Mrs Clinton tweeted that she was "dismayed" by the staff member's alleged ordeal.

But she said the woman "had her concerns taken seriously and addressed".

Not good for Mrs Clinton.

Vox, a liberal leaning media outlet, was not impressed by her latest bid to tamp down the controversy.

It wrote: "Her statement falls short as an apology, attempting to deflect attention onto others and failing to address some of the key issues in the case.

"Hillary Clinton is not directly responsible for Strider's conduct during her campaign. But she is responsible for how she reacted to it – a reaction that affected a woman's career and that may have left others vulnerable to harassment. Her statement on that reaction leaves a lot to be desired."

Houston Chronicle opinion columnist Alyssa Rosenberg wrote: "It's been the longest relationship of my life as a voter, and as a writer on culture and politics.

"But after last week, and the revelation that she failed to take her campaign manager's advice and fire an aide accused of sexual harassment in 2008, Hillary Clinton and I are done.

"And to be honest, it's probably overdue."