Senior Australian MPs have cancelled a planned trip to the UK as tensions heighten over the role of Huawei in building Britain’s 5G network.

Lawmakers from the intelligence and security committee had been expected to travel to the UK next month.

But the trip has been postponed amid reports of a diplomatic rift.

The decision follows a reported complaint from the UK over leaked details of a high-level meeting where Huawei was discussed.

Australia has banned the Chinese telecommunications giant from building its next-generation 5G mobile internet networks but Britain last month decided the company could continue to play a role in its system, despite pressure and warnings from Washington.

Details of the meeting were later leaked to the Sydeny Morning Herald, which said an MP had rebuked Mr Raab in the meeting over Britain’s Huawei decision, saying Australia was very disappointed.

According to Australian media that report prompted a formal complaint from Vicki Treadell, the UK’s High Commissioner to Australia, to the heads of two Australian parliamentary committees.

Australia and the UK are both part of the Five Eyes intelligence alliance, which also includes the US, New Zealand and Canada.

Australia’s parliament on Saturday confirmed the trip to the UK had been delayed but said it was due to the fact that the counterpart parliamentary committee in the UK was yet to be appointed following December’s election.

According to the Sydney Morning Herald, in the meeting with Mr Raab, Anthony Byrne, the deputy chair of Australia’s intelligence committee, said that allowing China to build the UK’s 5G telecoms infrastructure was equivalent to letting Russia construct it.

“How would you feel if the Russians laid down infrastructure in your own networks? That’s how we feel about Huawei,” Mr Byrne was quoted as telling Mr Raab.

In a Twitter post at the time, he said the meeting had involved a “full and frank discussion” over 5G and strategic challenges. Ms Treadell was present.

The Australian government has not officially commented.

In her letter to Australian MPs, Ms Treadell expressed her disapproval of the leak, ABC News reported. 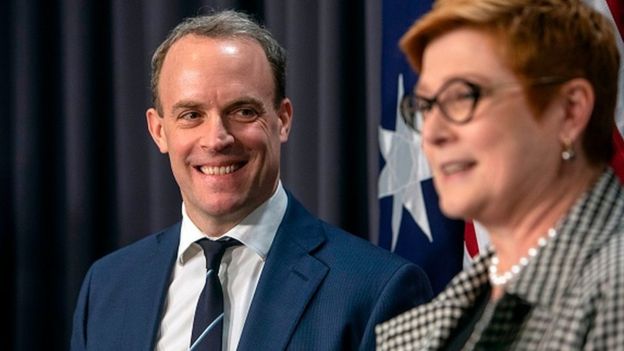 One unnamed committee member was quoted by the Australian broadcaster as describing Ms Treadell’s intervention as “foolish”.

Australian Treasurer Josh Frydenberg, however, sought to scotch suggestions of a rift, saying “our relationship with the United Kingdom couldn’t be stronger”.

Meanwhile, senior US officials stepped up their criticism of Huawei at an international security conference in Munich, Germany on Saturday.

US Defence Secretary Mark Esper warned that US alliances such as Nato were in jeopardy if European partners used Huawei technology in their 5G networks.

Why is there a row over Huawei?

The UK has only given Huawei partial access to its 5G network, banning it from supplying kit to “sensitive parts”, known as the core. Nevertheless, Australia and the US are unhappy with the decision.

Washington has argued that Huawei equipment could allow the Chinese state to spy via “back-doors”. The firm strongly rejects that it poses any security threat.

On a visit to the UK last month after Britain’s decision, US Secretary of State Mike Pompeo said that the Five Eyes intelligence partnership would remain in place despite previous warnings from Washington that it could be affected.

Last week, China’s ambassador to the UK, Liu Xiaoming, said those opposed to Huawei playing a role in the UK’s 5G network were conducting “a witch-hunt”.