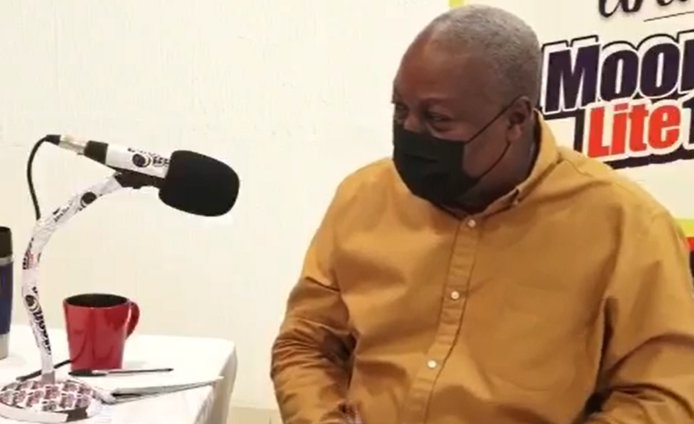 Former President John Dramani Mahama has alleged that the decision to spend money on past questions for final year students was not in their interest.

He wonders why past questions would be bought for students who do not have textbooks.

The government is said to have spent over ¢68 million on past questions for both 2020 and 2021 WASSCE candidates.

Various groups have since condemned the decision.

The Minority in Parliament said there was “no justification for the government to sole-source the contract to Kingdom Books and Stationery”, while Africa Education Watch said, “the processes leading to the purchase of the past questions did not guarante value for money”.

But the Deputy Education Minister, Reverend Ntim Fodjour disagreed. According to him, the interventions were necessary as they helped to prepare the students for the exams, and “there was consideration for value for money”.

Speaking on Moonlite FM in Sunyani on Wednesday, September 8, 2021, during his thank-you tour of the Bono Region, John Mahama, said it is surprising for the government to get into the business of printing past questions (Pasco) for students to learn.

He explained that during his time in school, such documents were bought by either a teacher or one student for everyone to learn from.

“How much is a past question at WAEC?”, he quizzed, adding that it was a matter of getting one for each subject for students to copy.

He said, “past questions are not something you study like a textbook. You rather learn your syllabus and use the Pasco to prepare yourself for the format of the exams”.

“Look at the amount of money they spent to buy the Pasco. That money should be used to provide textbooks. But someone gets money from it, so they have gone to buy past questions for the students”, he alleged.

John Mahama further asked why each student should have a book of past questions.

“If you give one class a book of past questions, students will copy when the teacher writes it on the board, so why do you spend that amount on past questions”, he asked, adding, “it’s not necessary”.

The 2020 NDC flagbearer, said the government has its way of doing things, without guidance.

Touching on the one teacher, one laptop initiative by the government, John Mahama, said the ministries of Education and Communication had a program during the NDC administration where they distributed laptops to some ICT labs, teachers, and students.

He, however, noted that the current initiative is not new.

Professor Jane Naana Opoku Agyemang, the running mate for John Mahama, speaking on the same radio program said the educational syllabus must be prepared in tandem with the national development agenda.

She said the syllabus should not just be prepared for the sake of it or because others are doing it, but through a well thought out process to achieve a specific goal.