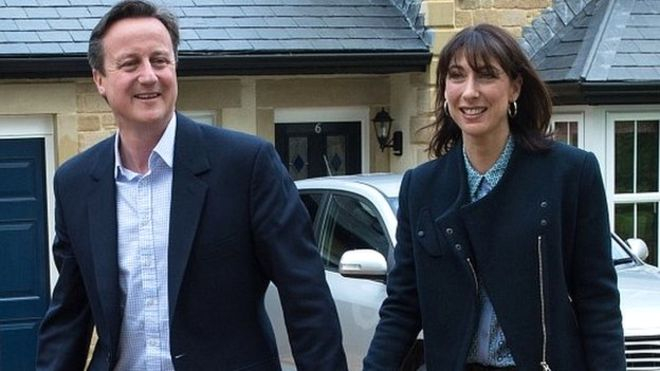 Predictions that the Conservatives will secure 316 seats is "an unprecedented vote of confidence in David Cameron", party chief whip Michael Gove has said.

The exit poll suggests the Conservatives will secure 316 seats – nine more than in 2010 – but not enough for a majority in the House of Commons.

Mr Cameron was "pleased" with the exit poll, said his chief spin doctor.

Mr Gove said if it is right, "it means the Conservatives have clearly won this election and Labour has clearly lost".

But Labour's shadow home secretary Yvette Cooper said she was "puzzled" by the poll and urged people to wait for the results before making predictions.

"It doesn't reflect any of the conversations and responses we've had," she said.

Commenting on the exit poll, Mr Gove told the BBC: "We haven't had an incumbent government increase its majority like this since 1983.

"And it would be an unprecedented vote of confidence in David Cameron's leadership and in particular in the message that we have reinforced throughout this campaign, which is that if people wanted to secure our economic security, they've got to make sure that David is in Downing Street."

He said it was too early to talk about potential post-election deals but if the exit poll proved right, "tomorrow the prime minister will outline the basis on which we can go forward with a secure and stable government in the national interest".

Mr Cameron would enjoy "considerable authority", he said, and it would be "by any measure a success" for him, despite the prime minister previously suggesting anything short of an overall majority would be a failure.

He said the PM was staying up to watch the election results at his constituency home in Witney, Oxfordshire, and had enjoyed beef pie and broccoli for dinner with his wife Samantha.

And London Mayor Boris Johnson, who is also standing in Uxbridge and Ruislip South, said: "If these exit numbers are confirmed throughout the night then obviously it's a very, very clear victory for the Conservatives and a very bad night for Labour."

However, a senior Conservative source was more muted in his reaction to the exit poll, saying: "Let's not get ahead of ourselves – let's see where we end up."

He told the BBC's Carole Walker if it is true, it is very encouraging and a good indication of the prime minister's standing, but he added that with many very tight marginal seats it was difficult to predict the final result.

The Conservatives could look to the Liberal Democrats to support them, but the exit poll suggests the Lib Dems will only win 10 seats.

DUP member Sammy Wilson said there would be "a price" to pay if his party entered any form of coalition with the Conservatives.

"The emphasis will be on getting the government at Westminster to recognise the economic difficulties we have in Northern Ireland," he told the BBC.

This would include looking at the impact terrorism has had on Northern Ireland's infrastructure and rebuilding the economy to make it less dependent on the public purse, he said.