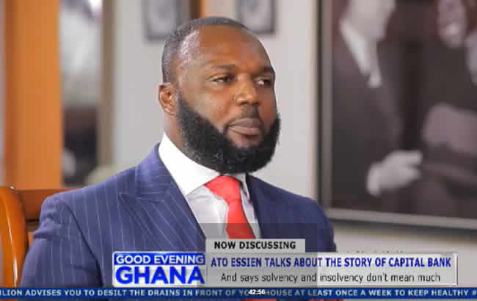 Founder of defunct Capital Bank William Ato Essien and three others have pleaded not guilty to 26 charges including stealing of various sums in excess of ¢260 million.

Attorney General Gloria Akuffo presented the facts of the case to an Accra High Court presided over by Justice Eric Kyei Baffour.

She told the court that liquidity support amounting to ¢620 million handed by the BoG to revive Capital Bank was appropriated (¢27million) and transferred to various companies owned by Mr Essien.

Some of this liquidity support according to the AG, was also presented by MC Management Services (owned by Mr Essien according to AG) as initial capital to get a banking license for the defunct Sovereign Bank.

An amount of ¢70 million she further stated, was sent into the private account of businesswoman Kate Papafio. She said the businesswoman then created an account at Capital Bank and transferred the amount into that account.

Following the bank moving into receivership, the AG said Mrs Papafio attempted to withdraw the money but was blocked from doing so.

The charges filed include conspiracy to steal; citing Mr Ato Essien and Tettey Nettey acting together between October and November 2015 in Accra to steal ¢100 million belonging to Capital Bank.

There is also the charge of abetment which cited Fitzgerald Odonkor, assisting Mr Ato Essien and Mr Nettey to dishonestly appropriate Capital Bank’s ¢100 million between the same timeline.

The four were also cited for laundering money between October and November 2015 in Accra as they converted ¢100 million knowing it was proceeds of crime.

The defence lawyers made applications for self-recognizance bail saying their clients will cooperate with the court and show up for trial when needed.

Dr Ayine further stated that the case will be “a groundbreaking case” since it’s the first time stealing has occurred with the consent of the owner.

The former Deputy Attorney General said the ¢620 million described as liquidity support was a loan to be paid with interest. He further stated that Mrs Kate Papafio engaged in legitimate banking transactions.

He said nothing stops a lending institution from lending money to an individual for that same money to be invested into the bank.

The AG did not oppose the application for bail. She, however, stated that adequate conditions should be set by the court.

He further ordered that all documents to be used in the course of the trial should be handed to the defence lawyers in line with disclosure as decided by the Supreme Court and directed by the Chief Justice by November 13.

DISCLAIMER: The Views, Comments, Opinions, Contributions and Statements made by Readers and Contributors on this platform do not necessarily represent the views or policy of Multimedia Group Limited.
Tags:
Accra High Court
Ato Essien
Capital Bank
Gloria Akuffo