Cardi B pleads not guilty to assault

Cardi B has pleaded not guilty to assault following a fight at a New York strip club last year.

The rapper and two members of her team have been charged with 12 crimes each including assault, harassment and conspiracy.

She and her co-defendants should return to court in September. If convicted they face up to four years in prison.

Cardi B turned herself in to police last October following the alleged assaults, which took place at the Angels Gentleman's Club in Queens.

The bartenders who say they were attacked claim Cardi and her entourage threw glass bottles and alcohol at them, and one woman's head was slammed into the bar.

The alleged victims are sisters, and the incidents were reportedly triggered after Cardi accused one of them of sleeping with her husband Offset. 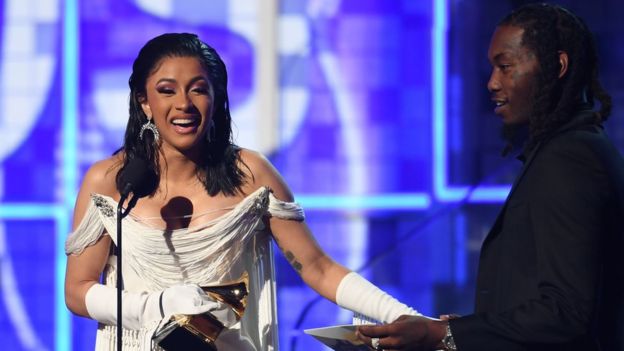 Bush is accused of filming an attack by a woman who hasn't been arrested or charged, on 15 August, as well as using his body to make sure nobody could intervene.

According to the acting Queens District Attorney John Ryan, Cardi and Jackson-Morel coordinated the day, time, location and victims of both attacks over a social media platform.

They also allegedly discussed money being exchanged for carrying out the assault.

All three defendants returned to the strip club on 29 August, according to the prosecutors, and attacked the sister of the previous alleged victim.

Jackson-Morel allegedly threw a cocktail into the 23-year-old woman's face and Bush and Cardi B, as well as "several unapprehended others," also threw drinks, glass bottles and various objects at the bartender, according to DA Ryan.

The victim suffered from "lacerations to her legs, bruising to her feet and the alcohol thrown in her face irritated her eyes," the prosecutors say.

Cardi B rejected a plea deal in April which would have seen her given a conditional discharge – escaping a prison sentence unless she committed a further offense.

But her lawyer is confident she'll be cleared.

"The rest of the defence team and most importantly our client know that through this system, ultimately there will be a favourable outcome in favour of Cardi," Drew Findling said.

Cardi B's not guilty plea comes a few days after she won best album and best female artist at the BET Awards, which follows on from winning best rap album at the Grammys earlier this year.