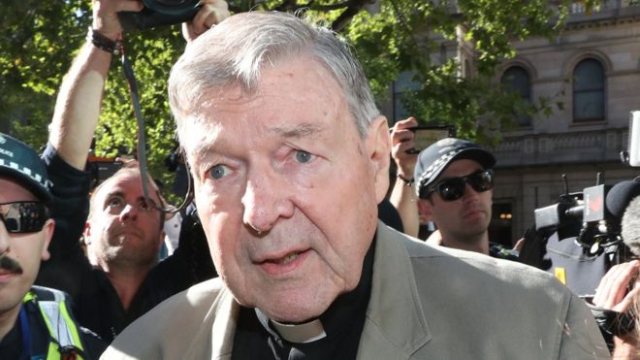 Cardinal George Pell has been jailed for six years after being convicted of sexually abusing two boys in Australia.

The former Vatican treasurer is the most senior Catholic figure ever to be found guilty of sexual offences against children.

Pell abused the 13-year-old choir boys in a Melbourne cathedral in 1996, a jury ruled last year.

The cardinal, 77, maintains his innocence and is appealing against his convictions.

In sentencing Pell on Wednesday, a judge said the cleric had committed "a brazen and forceful sexual attack on the two victims".

In December, a jury unanimously convicted Pell of one charge of sexually penetrating a child under 16, and four counts of committing an indecent act on a child under 16.

His conviction has rocked the Catholic Church, where he had been one of the Pope's closest advisers.

Abuse survivors were among those who travelled to Melbourne on Wednesday to witness Pell's sentencing before a packed courtroom.

Pell will be eligible for parole after three years and eight months. His appeal will be heard in June.

What did the court hear previously?

Last year, a court heard that Pell had abused the boys following a mass in St Patrick's Cathedral in 1996, when he was archbishop of Melbourne.

After telling them they were in trouble for drinking communion wine, Pell forced each boy into indecent acts, prosecutors said. He abused one of the boys again in 1997.

What did the court hear previously?

Last year, a court heard that Pell had abused the boys following a mass in St Patrick's Cathedral in 1996, when he was archbishop of Melbourne.

After telling them they were in trouble for drinking communion wine, Pell forced each boy into indecent acts, prosecutors said. He abused one of the boys again in 1997. 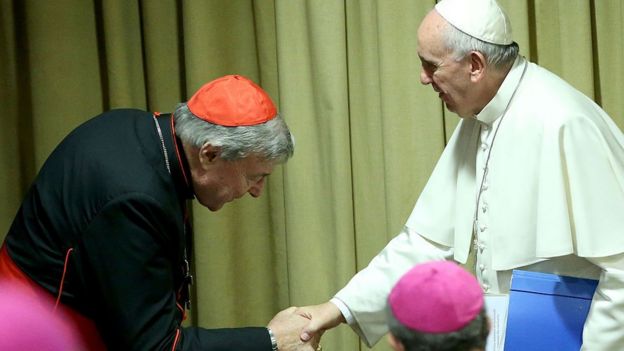 Pell has been close adviser to Pope Francis in recent years

The verdict was kept secret from the public until February, when additional charges of sexual offences against Pell were withdrawn by prosecutors.

What did the judge say on Wednesday?

Judge Kidd said Pell's abuse was particularly callous because the cleric had been in a position of power.

"You were the archbishop of St Patrick's Cathedral no less, and you sexually abused two choir boys within that cathedral," he told the County Court of Victoria.

The judge said there was a "real" possibility that Pell may not live to be released from prison, and that he had considered the cleric's age and health in sentencing.

Judge Kidd added that Pell should not "be made a scapegoat" for wider failings within the Catholic Church.

In an unusual move for local courts, the lengthy sentencing was broadcast live – in what officials said was a commitment to "open justice".

How will Pell appeal the verdict?

His lawyers argue that the jury's verdict was "unreasonable" because it relied too heavily on the testimony of one person – the victim who is alive.

They have also asserted that Pell was wrongly prevented from entering his plea before a jury, and that a defence animation should have been allowed as evidence at the trial.

A court will begin considering the appeal on 5 June.

What's been the reaction?

Pell's surviving victim – who cannot be named – welcomed the sentence but said it was hard "to take comfort in this outcome".

"There is no rest for me. Everything is overshadowed by the forthcoming appeal," he said in a statement read by his lawyer.

Some advocates for abuse survivors said they had hoped for a tougher sentence. 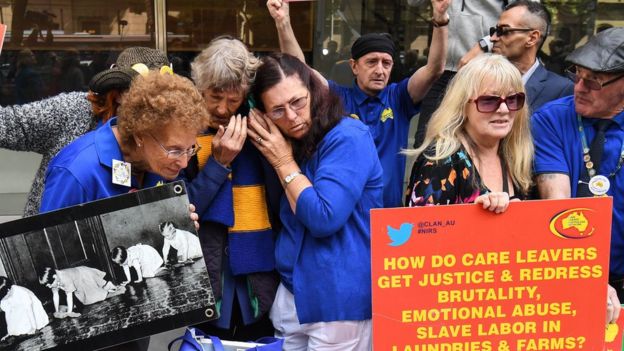 Many people travelled to the court to hear the sentence

Last month, the Vatican described Pell's conviction as "painful news" that had "shocked many", and said he was prohibited from public ministry. He was removed from the Pope's inner circle in December.

The Church noted, however, that the cleric had a right to "defend himself to the last degree".

The cardinal's crimes have drawn widespread condemnation, though he has retained the support of some high-profile figures in Australia.

What is the wider picture?

The sexual abuse of children was rarely discussed in public before the 1970s, and it was not until the 1980s that the first cases of molestation by priests came to light, in the US and Canada.

In the decades since, evidence of widespread abuse has emerged globally. In Australia, an inquiry heard that 7% of the nation's Catholic priests had abused children.

Pope Francis has established a committee to tackle sexual abuses. At a landmark Church summit on paedophilia last month, he said clergy guilty of abuse were "tools of Satan".

But critics say he could do more to combat paedophiles and those who conceal abuse.