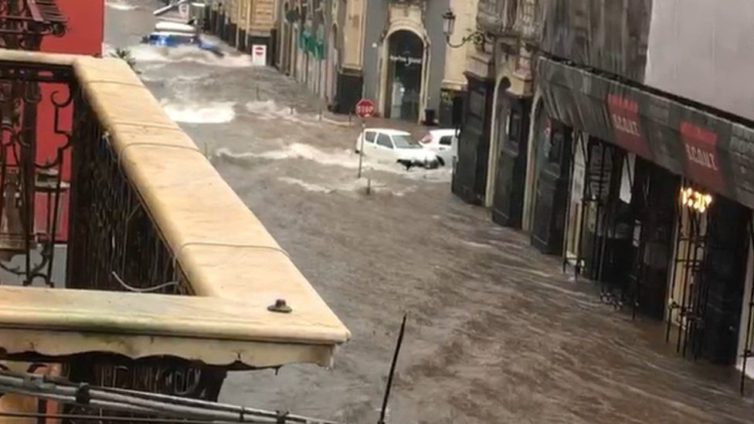 Flooding triggered by a powerful storm has overwhelmed the Sicilian city of Catania, killing at least two people.

Fierce storms battered southern Italy for a third day on Tuesday, leaving roads completely submerged in parts of the island of Sicily.

Dramatic video from Catania showed water gushing through the streets as floods engulfed the city.

Forecasters say eastern Sicily is being hit by a rare Mediterranean hurricane, known as a Medicane.

Italy’s Department for Civil Protection issued its most severe weather warning for parts of Sicily and neighbouring Calabria on Tuesday.

The agency warned of potential risk to life and damage to property from heavy rain, thunderstorms and gale force winds in those areas.

The mayor of Catania, Salvo Pogliese, said eastern parts of Sicily were experiencing exceptional weather events “unprecedented” in their intensity.

Citing the “seriousness of the situation”, the mayor ordered the closure of all businesses in Catania except essential services until midnight on Tuesday.

“I urge the entire population to not leave home except for emergency reasons, because roads are overrun by water,” the mayor posted on Facebook.

In #Sicilia it has been raining for 3 days without stopping. This is the situation in #Catania, now. My thoughts are there. Come on wonderful people ❤ pic.twitter.com/k7955Hz9SR

Italian media reported the death of a 53-year-old man who was found under a car after torrential rains swept through the town of Gravina, north of Catania.

The deaths comes after the body of a 67-year-old man was found on Monday. Rescuers are still searching for his 54-year-old wife, who was swept away along with her husband by flood waters in the town of Scordia, also near Catania, on Sunday.

The rain has deluged historic parts of Catania, turning its Via Etnea high street into a river and its squares into lakes.

A blackout has left homes and businesses without electricity, while schools have been closed in the city and nearby towns.

“The emergency situation is widespread and extremely critical and it does not seem to be improving,” a spokesman for the fire service told Reuters news agency.

Italian weather website iLMeteo said the storm was expected to gradually worsen throughout the week, bringing more heavy rains and flooding on Thursday and Friday.