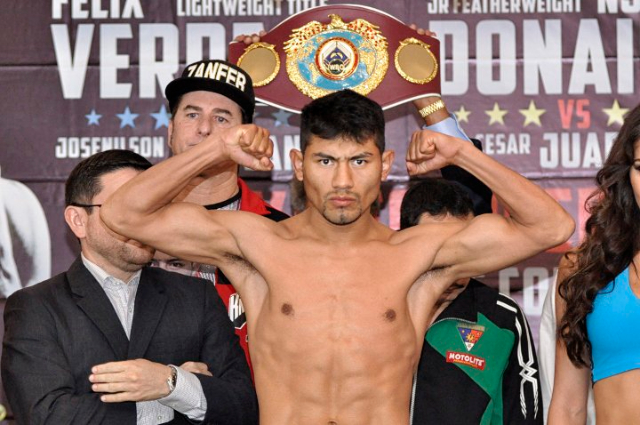 While Ghanaians bask in the glow of Isaac Dogboe's victory against Cesar Juarez on Saturday night, the Mexican feels he was not given a fair chance.

After being dropped in the fifth round – following an initial second round downer from Dogboe – Juarez was surprised when referee Tony Weeks stopped the bout held at the Bukom Boxing Arena in Accra.

"Actually I feel very angry. The fight was already mine, Dogboe did not beat me. The one who robbed me and beat me was Tony. He is a professional referee but today there was an act on his part with little professional ethics," said Juarez to ESPN Deportes.

"He had to give me the count. I looked good, he dropped me in the [second] round and that punch was a lot worse, it was harder [than the punch in the fifth]. But you know me, they always drop me and I always get up to win."

Juarez has a history of brawling and being a slugger. And he's no stranger to being knocked down, something he pointed out. He felt Weeks did not put his history into perspective when making the decision.

"The fight was badly stopped, I got up like a spring because [the punch] didn't put me in a bad condition. He caught me and it was badly stopped. That's why I got up quickly, because I immediately recovered. They have seen my fights. They know of my ability, I always get up to win, it happened to me with (Albert) Pagara, with Nonito (Donaire). In all my fights they drop me and I always get up to win, and besides that I was already dominating Isaac Dogboe."

"He connected me on me hard [in the second], but in the third and fourth rounds, the fifth round.. I felt that I was dominating him.. he was not as strong, I did not feel him having the same power, I felt that I was going to knock him out because he was already very tired. I was fine, and as the rounds progressed I felt more loose and stronger.

"I would really like to get a protest, the referee's performance was bad, he did not ask me if I felt good, I asked him why, 'why are you stop it', I told him I was fine, I said 'I'm good', I'm well, and the truth is  I got very angry, it was a moment that filled me with anger because I felt strong enough to continue."

Dogboe had been lining up for a perfect moment to deliver a decisive punch, and with 59 seconds left in round five, his Mexican counterpart walked into a left hook.

Juarez swayed momentarily, and then went down.

Between the moment he hit the canvas and the time Tony Weeks stopped the fight, exactly five seconds had elapsed. Replays show that Juarez may be right: Weeks did not give him enough time nor did the ref clearly give him the count. And once the fight was stopped, the Mexican could be seen protesting against Weeks as the ref held him tight (above, pictured).

The loss sets the Mexican one step back as Dogboe now has the chance to a mandatory title fight with Mexican-American Jesse Magdaleno, who put off his initially planned fight with Juarez due to a wrist injury.

Dogboe is now the World Boxing Organization's interim-super bantamweight title holder, and should Magdaleno not honour their scheduled fight, the Ghanaian will be elevated automtically to champion status.