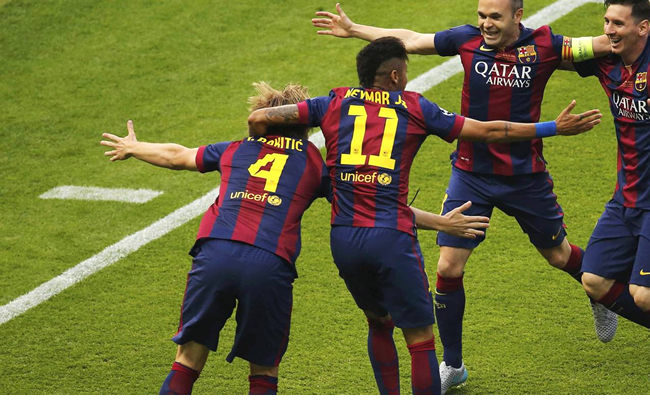 – And at the death Neymar gets his goal. Almost immediately the ref whistles for full time! Barca are champions!

– There is drama at Berlin as Neymar increases the tally to three but referee disallows the goal. It appears to be a great header but the referee says the ball hit his hand before entering the net. Replay suggests the referee's decision is correct.

– Goal!!!!!! It is Suarez who pounces on a rebound after Buffon saves a Messi strike. The favourites are back in the lead at Berlin.

Morata draw level for Juventus with a rebound in the 55th minute. Machisio began the attack with a great back heel from Machisio who set up Tevez. The Argentine fired from close range with the Barcelona goal keeper parrying the shot in the path of Morata. The former Real Madrid striker kept his cool and slotted home for what will be the biggest and most important goal of his young career.

Favourites Barcelona take an early lead against Juventus. It is Ivan Rakitic who knocks home from close range in the 4th minute after great piece of play from Neymar and Iniesta.

Macherano makes another sloppy defending and concedes a corner. Juventus waste the corner.

Alvaro Morata takes on the Macherano, beats him with his lightening pace and sets up Tevez but he balloons over the bar.

Juventus begin the Champions league final with a great sense of urgency putting the pressure on the favorites Barcelona.