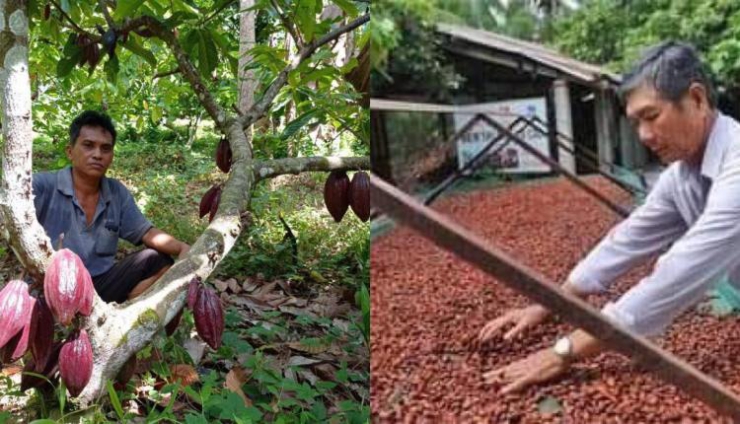 News about China exporting cocoa to Belgium has unsettled many in Ghana, the world’s second-largest cocoa beans exporter.

Concerns are that the Chinese, with capital and technology, will outcompete Africa’s cocoa producers whose economies depend massively on the commodity.

But a cocoa farmer and cocoa value addition entrepreneur, Nana Aduna II, wants the public to shrug off the fears.

He would rather Ghanaians see the development in a positive light and be challenged instead to strive at making more out of the crop locally.

Nana Aduna II, who is also Chief Executive of Ohene Cocoa, believes the dawn of Chinese cocoa production and export must awaken Ghana to be more aggressive at adding value to cocoa beans beyond the conventional chocolate and cocoa powder.

“China’s entry is a very positive move. It should spur Ghana on to be more aggressive about cocoa value addition beyond chocolate and cocoa powder,” he opined, in a Daily Graphic interview.

On that score, he was convinced the government of Ghana’s novelty One District One Factory Initiative could be used to catalyse a paradigm shift in the country’s cocoa industry where domestic value addition becomes the order of the day.

“Everybody knows that we will make more money when we add value to the bean. Because we sell raw beans to the markets, the price is dictated to us, but if we add value, the possibilities are limitless”, says Dr Amporful.

The passionate cocoa consumption advocate is the chairman of a new committee by Ghana’s cocoa regulator COCOBOD tasked to assess and recommend how local processing and value addition enterprises could be supported to access Africa’s novel US$3-trillion continental trade platform – AfCFTA.

“Local processors and cocoa value addition artisans are our major stakeholders in our drive to add value to the cocoa beans so that the farmer at the end of the day also benefits because then we can give the farmer a price worth his labour”, Dr Amporful intimated.

For Nana Aduna, China’s entry into the league of cocoa-producing countries could serve as a necessary impetus for Ghana to develop simple and appropriate technologies to add value.

He noted the Cocoa Research Institute of Ghana (CRIG) could be instrumental in this direction, having already successfully developed dozens of products out of cocoa begging for commercialization.

Last October, China announced it has successfully made its first-ever cocoa beans export to Belgium.

According to the Chinese Academy of Tropical Agricultural Sciences (CATAS) the cocoa was produced by South China’s island province of Hainan.

The first batch of 500 kg of the China cocoa beans, worth 3,044 euros (about $3,600), was produced in Xinglong, a township of Hainan with a tropical climate.

“Cocoa is a raw material for making chocolate. With the increasing demand for chocolates, Hainan has been expanding its cocoa planting area and making breakthroughs in technological development,” said Hao Zhaoyun, a researcher with CATAS.

“As Belgium is dubbed ‘kingdom of chocolates,’ exports to the country indicate that our cocoa production standards have been recognized by the international community,” Hao added.

Cocoa is mainly produced in tropical regions such as West Africa. Hainan is the most northerly cultivator of cocoa in the world.

DISCLAIMER: The Views, Comments, Opinions, Contributions and Statements made by Readers and Contributors on this platform do not necessarily represent the views or policy of Multimedia Group Limited.
Tags:
COCOBOD
Nana Aduna II