China's ex-security chief Zhou Yongkang has been jailed for life – the most senior politician to face corruption charges under Communist rule.

Until his retirement in 2012, Mr Zhou was one of China's most powerful men.

He was put under investigation one year later as part of President Xi Jinping's major anti-corruption campaign.

State TV showed a clip of Mr Zhou, 72, pleading guilty at a closed-door trial in the northern city of Tianjin. When responding to the judge, he said he would not launch an appeal.

"I've realised the harm I've caused to the party and the people. I plead guilty and I regret my crimes," he said.

The news agency said Mr Zhou was tried behind closed doors on 22 May because the case involved state secrets. There was no public announcement until the conviction was reported on Thursday.

In a breakdown of the ruling, Xinhua reports that Mr Zhou received a life sentence for accepting bribes worth 130m yuan ($21.3m; £13.8m), seven years for abuse of power and four years for "deliberately releasing state secrets".

All political rights have been stripped and his property confiscated, it added.

Mr Zhou was charged in April, nine months after a formal investigation was announced. He has since been expelled from the Communist Party. 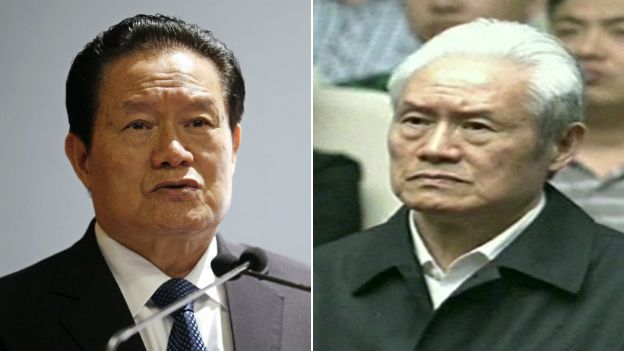 Zhou Yongkang pictured as a Politburo member in 2010, then again at his court hearing in 2015

He was once head of the Ministry of Public Security, as well as a member of China's top decision-making body, the Politburo Standing Committee.

It is the first time such a senior Chinese figure has been convicted of corruption since the Communist Party came to power in 1949.

President Xi Jinping vowed to end endemic corruption when he came to power in 2012.

Since then, a number of Mr Zhou's former associates from his time working in the oil industry and as Communist Party chief in Sichuan province have been investigated or prosecuted as part of Mr Xi's corruption crackdown.

The Xinhua report did not refer to Bo Xilai, a former protege of Mr Zhou's and former Chongqing Communist Party chief, who is currently in prison on charges linked to his wife's murder of a UK businessman.