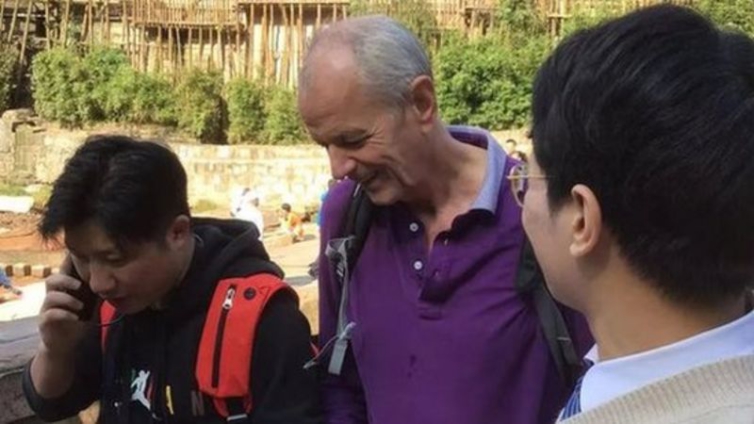 A British diplomat has been hailed as a hero after diving into a river in China to save a drowning student.

Consul-general in Chongqing, Stephen Ellison, 61, was walking by a river in a nearby village when the woman, 24, slipped on rocks into the deep water.

Footage filmed by onlookers showed her struggle in the fast-moving current, disappear under a footbridge and emerge face down, apparently unconscious.

Mr. Ellison took off his shoes and dived in to save her. She has not been named.

The consul general, who takes part in triathlons, turned the student over, lifted her face clear of the water and swam backwards to the steep sided riverbank.

“She was unconscious, she was not breathing and for a short time we feared the worst. But as we got back to the side, she started breathing again,” he told the BBC of the rescue, which took place on Saturday morning.

The diplomat held onto a lifebuoy attached to a rope that had been thrown towards him by passers-by, who then pulled the woman to safety. Mr. Ellison swam round to shallower rocks and climbed out. He was given dry clothes and warm drinks by grateful villagers.

He said the student, who is from Wuhan and attends Chongqing University, was shaken by the experience and recovering slowly.

But she was extremely grateful and has invited him to dinner with her family next weekend.

Mr. Ellison, originally from Newcastle, is head of the British mission in Chongqing – where his role is primarily to support bilateral trade links between Britain and China.

‘In China we call him a hero’

Relations between China and the UK have been rapidly deteriorating over the past year, amid rows over Hong Kong, tech firm Huawei and the coronavirus.

Yet there’s full praise online for Mr. Ellison, with Chinese social media users calling him a “hero”, a “role model” and someone who is “worthy of admiration” for saving the student, who media said fell “while taking pictures”. He’s being described as “uncle”, a term almost never used to describe foreigners.

“You’d call such a person a knight in the UK; in China we call him a hero,” one user on the popular Sina Weibo site says.

“For such a big official to go into the water himself to save someone… you’ve got to like this,” another wrote.

Footage of the incident filmed on locals’ phones has racked up more than a million views after it was posted online by popular media outlets Global Times and Pear Video. It’s also got locals doing a bit of self-reflection on how they view foreigners.

Despite recent negative feeling towards Britain, many Chinese say they’re “shocked” that “so many [local] people were watching, and not a single person rushed to the water themselves” to help.

Such scenes are common in China – crowds of people standing watching a developing incident. Many fear that rushing to involve themselves could lead to their being implicated. Where this has happened previously, many have debated whether China has a “morality” issue.