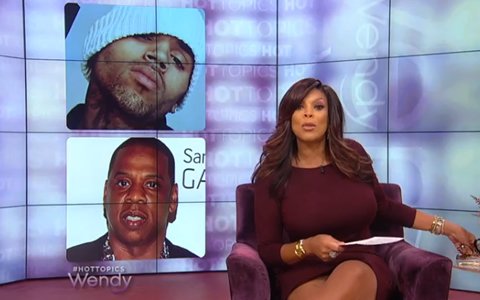 Chris Brown is reported to have said in a recent interview with African-American newsweekly magazine, Jet Magazine that the media have consistently been unfair to him while Jay Z, in spite of his bad past, has been accepted by White America.

He told the magazine: "Jay Z gets accepted by White America because he shakes hands and kisses babies. No disrespect, because I’m a fan, but nobody brings up the fact that he stabbed somebody and sold drugs. He gets a pass."

Wendy Williams commenting on Chris Brown's remarks on her show, The Wendy Williams Show, jabbed the 'Don't Judge Me' hit singer stating he is to blame for his current predicaments.

"I remember when he stabbed Ann, he was mildly famous at the particular time, a lot of you didn't know who he was at that time but he was big here in New York and he stabbed this guy name Ann and yeah did get swept under the rug. Also the drug dealing and stuffs to my best knowledge that was before we even knew him as a Jay or a Z," she said.

"You were less than smart in trying to blame Jay Z, you need to blame yourself young man," the controversial show hostess added.

Wendy Williams bluntly stated that, Chris Brown is "a woman beater, you are disrespectful, you threw a chair out of the window of Good Morning America," and wondered "whatever happened to that cute young man that used to dance for the double man?"

A passionate Wendy took Chris Brown to the cleaners saying, "I get it all boys grow up, a boy grows into a man but you have grown [and] you look like a junkie. You have got those nasty tattoos, you are way too skinny, you don't seem to have respect for much at all, you beat the stool out of Rihanna and you [are] with that [Karrueche Tran] right now."

She observed that, "Rihanna is good but the Rihanna she's become is to me a little bit too edgy. If you looking [for] a change around your image and want to be treated the way Jay Z is, why don't you go out with a nice girl…?"

"It helps Jay Z's image that Jay Z is very cognizant of his image but it also helps a lot that he's with a nice girl named Sasha Fierce [Beyonce]," Wendy added.