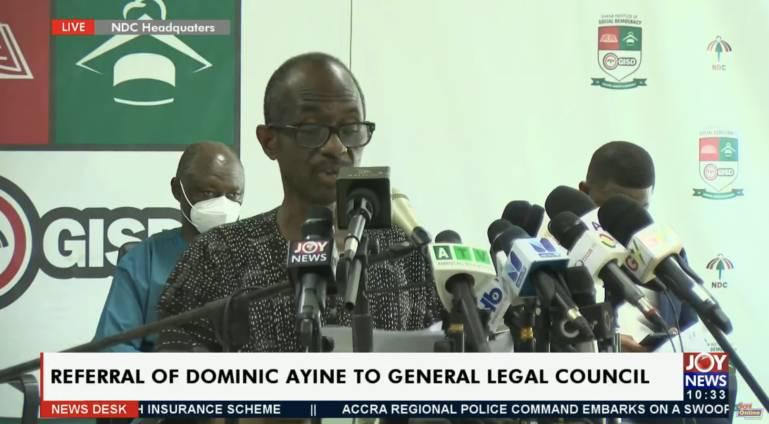 The opposition National Democratic Congress (NDC) has described the Chief Justice’s disciplinary petition against Dr. Dominic Ayine as a grand plot aimed at intimidating and suppressing the views of Ghanaians, especially members of the minority.

“To my common sense, it doesn’t make sense to invite Dr. Ayine to the Disciplinary Committee,” General Secretary of the party, Johnson Asiedu Nketia said while addressing a press conference at the Party’s headquarters in Accra, Monday.

According to him, the action taken against the Bolgatanga East MP is only a sign of a larger problem in the judiciary which needs to be addressed.

“It is no coincidence that virtually all the lawyers who have been reported to the Disciplinary Committee of the General Legal Council by the Chief Justice, Justice Kwasi Anin-Yeboah in recent times are aligned to the NDC. What is the Chief Justice’s personal interest in the punishment of NDC-affiliated lawyers, that he initiates unwarranted petitions against them?”

“We dare say that such treatment will not be meted out to lawyers who are aligned to the NPP (New Patriotic Party) for reasons best known to the Chief Justice himself,” he alleged.

Mr. Asiedu Nketia further underscored that Dr. Ayine stayed within the bounds of professionalism, was courteous to the court, kept his language decent and temperate; thus his referral to the Disciplinary Committee is not only bizarre but unfortunate and speaks volumes about the Chief Justice.

He stated unequivocally that the comments Dr. Ayine made are views he is entitled to under the 1992 Constitution and do not violate any rule of professional conduct for lawyers.

“When the petitioner applied for a review of this decision and the court was presented with a golden opportunity to correct this clear error of law, the court refused to do so without any plausible reason. How then can anybody fault Dr. Ayine for saying that his hopes about the independence of the judiciary was dampened by the way and manner the Court failed to apply the law,” he quizzed.

Dr. Ayine, a member of former President John Mahama’s legal team during the 2020 Election petition, questioned the judiciary’s independence on how the Supreme Court arbitrated the Election Petition.

Dr Ayine maintained that the posture of the Supreme Court judges throughout the Election Petition hearing suggests that it had a “pre-determined agenda” to rule against the petitioner, John Dramani Mahama.

He made a similar statement during the hearing of the petition at a press briefing on February 16, 2021.

The MP was found guilty of contempt of the Supreme Court but was discharged after he apologised.

The petition, signed by the Judicial Secretary, Justice Cynthia Pamela Addo, accused Dr. Ayine of questioning the independence of the Judiciary due to the Supreme Court’s adjudication of the 2020 presidential election petition.

“Dr. Ayine apologized profusely when he appeared before the Court on the contempt charge and admitted to having made comments which were unbecoming of a Lawyer of his standing and a former Deputy Attorney-General.

“His Lordship, the Chief Justice, therefore, finds his alleged disparaging comments totally unacceptable and would like you to investigate this matter further,” the petition averred.