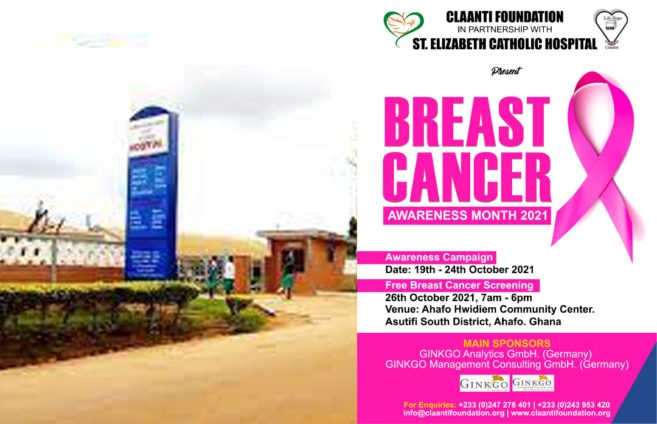 A non-governmental organization (NGO), Claanti Foundation in partnership with St. Elizabeth Catholic Hospital at Hwidiem in the Ahafo Region has commenced a breast cancer awareness campaign to sensitize residents on the impact of breast cancer.

The campaign which began on Tuesday, October 19, 2021, is to create awareness and educate women in the Ahafo area on the dangers associated with the failure to undergo breast screening.

According to the Senior Manager of Claanti Foundation, Mr Owusu Yaw Ansah, the programme would help enlighten women and men about early detection, treatment, impact and ways to prevent breast cancer.

“We are doing this for the communities in Ahafo, and we chose this particular place because of the fact that Accra or the various cities are already choked with some campaigns,” Mr Ansah said.

He also indicated that it is time to “move out in the communities and educate the less privileged” stressing that “their lives matter to us.”

After a rigorous campaign, the foundation’s free screening would be held on 26th October, 2021 at Ahafo Hwidem Community Centre in the Asutifi South District.

The screening exercise will cover residents from Kenyasi, Ntotroso, Achirensua, Nkaseim and other adjoining communities.

The programme is being partnered by GINGKO Analytics GmbH and GINGKO Management Consulting GmbH all in Germany.

October is globally marked as a month to raise awareness to reduce the stigma of breast cancer through education on symptoms and treatment.

In addition to increasing awareness about the disease, organizations also raise funds for research into its cause, prevention, diagnosis, treatment, and cure.

It is for this reason that Claanti Foundation has reached out to residents of Ahafo with the highly anticipated campaign that is expected to save lives.