Climate change is already impacting the health of millions around the world, from expanding the range of disease-carrying mosquitoes to worsening chronic kidney disease to increasing the frequency of deadly heat waves.

But the worst effects will fall to the youngest, and most dire for them lie ahead. That’s the conclusion of a major report published by the British medical journal The Lancet on Wednesday.

“To the extent that we’re asking, well, how is it different from before to the life of a child born today? That child now is being born for the first time into a world where their health will be affected at every single stage of their life by a changing climate,” Nick Watts, executive director of the Lancet Countdown on Health and Climate Change, said during a call with reporters.

A baby born today could experience a world that is more than 4 degrees Celsius warmer than the pre-industrial average, well above the roughly 1 degree Celsius of warming the world has experienced so far, the report notes.

As children, this next generation faces growing risks from climate-related hazards like less nutritious crops and spreading diarrheal disease. As these children grow up, they will encounter air pollution exacerbated by burning fossil fuels. When they enter the workforce, they may struggle to earn money as rising average temperatures make it more difficult to work outdoors. And their lives and livelihoods could be disrupted by extreme weather becoming more severe.

The countdown report has more than 100 contributors from 35 international institutions, ranging from the World Health Organization to the University of Colorado to the International Livestock Research Institute. This annual report tracks 41 climate health risk indicators including flood and drought, national climate adaptation planning, clean energy investment, and media coverage of climate change and health.

The authors said that the findings this year are particularly significant. “In 2019, for this report, this is the first time that we feel as though we can say actually these health impacts have arrived in full,” Watts said.

At the moment, some of the most severe climate change health effects are on the elderly. The researchers found that there were more than 220 million additional heat wave exposures in 2018 for people over 65 compared to the average between 1986 and 2005. They found that three-quarters of countries in the world saw an increase in the populations exposed to wildfires over the past three years compared to the 15 years prior. The report also emphasizes that mental health issues linked to climate change are emerging, particularly for those dealing with traumas of migration and loss. 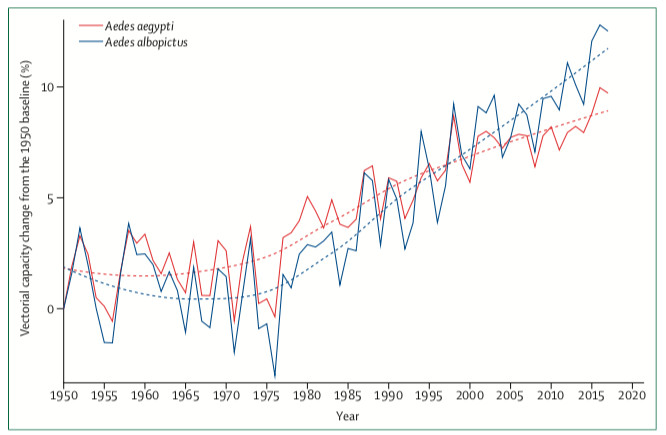 The vectorial capacity, the ability of a vector to spread a disease, is on the rise for Aedes mosquitoes around the world. These mosquitoes spread viruses like dengue and Zika.

But the most alarming conclusions of the report are what lie ahead for future generations, since climate change is a generational problem. Mass migration, as people retreat from rising seas, threatens conflict and mental health problems, for example. In urban areas, rising temperatures coupled with growing pollution sources will lead to an overall reduction in the quality of life for the next generation.

“The incidence of asthma for instance, we see it is directly related to the environment that the child is in among other variables as well,” said Richard Carmona, a former surgeon general in the George W. Bush administration, who was not involved in the report. “So I think [reduced] quality of life, I would say, we definitely can say has an impact on children born today. And if we don’t curtail the changes in climate, we can expect that many of these challenges will increase.”

The findings validate the angst that many young people experience when they contemplate the world they will inherit. It’s also a reminder there are people alive right now who have stakes in how hot the planet will be in 2100.

However, the report also shows that there is still time to act to avert some of the most severe health consequences of climate change. Limiting warming to less than 2 degrees Celsius, the goal of the Paris climate agreement, would require coordinated global action that would have immense benefits for health, particularly for young people.

“In a world that matches this ambition, a child born today would see the phase­out of all coal in the UK and Canada by their sixth and 11th birthday; they would see France ban the sale of petrol and diesel cars by their 21st birthday; and they would be 31 years old by the time the world reaches net-­zero in 2050, with the UK’s recent commitment to reach this goal one of many to come,” the authors wrote. “The changes seen in this alternate pathway could result in cleaner air, safer cities, and more nutritious food, coupled with renewed investment in health systems and vital infrastructure.”

The report also highlights tactics to adapt to changes in the climate that are unavoidable. These measures include building a global health and climate monitoring system, tracking high climate risk areas in cities, anticipating the spread of disease vectors, and providing plans to cool people off during periods of extreme heat.

“The mitigation and adaptation recommendations in the report are something that I think people should focus attention on, because I want them to know that climate change isn’t a lost cause,” said former Environmental Protection Agency Administrator Gina McCarthy, who served in the Obama administration and was not involved in the report. “Health and climate are not unrelated issues; they are directly related.”