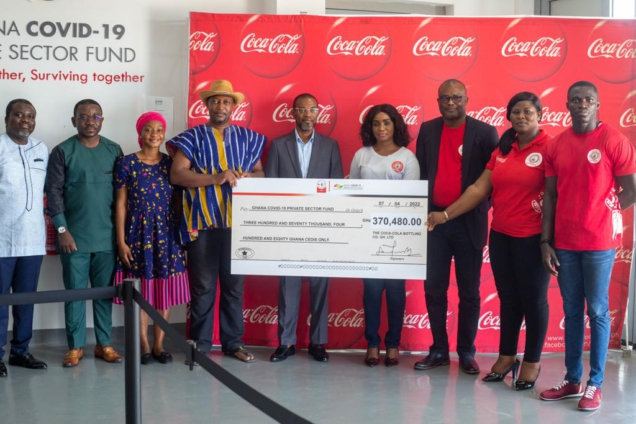 Following the outbreak of the pandemic, the company embarked on a consumer support campaign to remit funds from the sale of its products to the Covid-19 Private Sector fund to support the fight against Covid-19.

At a brief ceremony to present its final contribution of ¢370,480 to mark the end of the campaign, Human Resource Director of the Equatorial Coca-Cola Bottling Company – West Africa Business Unit, Robert Akazaawie,  expressly thanked consumers for supporting such a well-meaning cause and went further to congratulate the administrators of the fund for leading such an impactful initiative.

“As you are rightly aware, the campaign, which was originally scheduled to terminate in June 2021, was extended to December 2021 upon realising the need to do more considering how critical the pandemic had become at the time.

“Our consumer donation campaign may be over, but our commitment to supporting initiatives that put health and wellbeing at the fore remains eternal,” Mr Akazaawie added.

Receiving the cheque on behalf of the Fund, a Trustee Member of the Technical Committee, Kobina Ata-Bedu thanked Coca-Cola for the immense support over the period and encouraged Ghanaians to keep supporting the efforts of the Private Sector Fund.

The Coca-Cola Bottling Company of Ghana Limited, aside from contributions made to the Covid-19 Private Sector Fund, has also made significant donations of PPE, beverages, and food items to vulnerable communities and frontline workers as part of its Covid-19 social intervention program.

DISCLAIMER: The Views, Comments, Opinions, Contributions and Statements made by Readers and Contributors on this platform do not necessarily represent the views or policy of Multimedia Group Limited.
Tags:
Coca-Cola Bottling Company of Ghana Limited
Covid-19 in Ghan
Covid-19 Private Sector Fund
Equatorial Coca-Cola Bottling Group