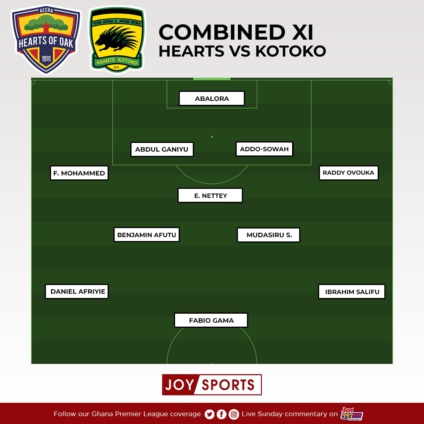 The game also comes at a time when the two teams have found good form. The two teams lie first and second, only separated by goal difference.

Ahead of the big clash on Sunday afternoon, we’ll attempt to put together a combined XI of the phobians and the porcupine warriors.

Goakeeper – Razaka Abalora: Abalora has been an embodiment of consistency since joining Kotoko. The former WAFA shot stopper has kept 12 clean sheets in the 1,980 minutes he’s played for Kotoko in the GPL this season. It is this consistencey that has established him as number one among a trio of top goalkeepers at Kotoko.

Right Back- Fatau Mohammed: His has been a remarkable turnaround after warming the bench in the early parts of the season. The defender showed great form in the season before this but mysteriously lost it and fell out of favor under Edward Odoom but the appointment of Kosta Papic handed him a lifeline which he grabbed and hasn’t looked back.

Left Back- Rady Ovouka: The Congolese international is a calm presence at left back for Hearts. He joins the attack when needed and is right there behind the ball when a tackle is needed around his zone. In short he delivers doth defensively and offensively. It is this calmness and assuredness that has him representing his country despite not featuring in the more prestigious continental competitions.

Center back- Abdul Ganiyu: Ganiyu’s trajectory has been on the up since joining the porcupines from Karela United in 2018. As far as defenders go, he’s as close to the complete package as the expression suggests. His reading of the game may not be “world class” but it’s not the worst we’ve seen. He’s strong and athletic and has great timing when a last ditch challenge is needed. You must be really good if you’re to get a call up into the senior national playing locally, more so for a center back.

Center Back-Robert Addo-Sowah: Addo Sowah’s ability has never been in doubt and it feels like an injustice given how long he’s been at the club and how often he’s been overlooked for defenders of lesser quality. His game reading abilities mean the tackles are often as clean as a whistle. Add to that the maturity and organization he brings to the backline and you wonder why it’s taken him this long to have a consistent run of games for a team that clearly needs him.

Midfield- Benjamin Affutu: Affutu is a workhorse , a tireless tackler who leaves it all on the field but it is not all about his strength. He’s learnt his role and grown into it admirably. His ability to pop up in attacking positions has yielded five goals and 13% goal participation for Hearts. A defensive midfielder who weighs in with goals is definitely an asset.

Midfield- Emmanuel Nettey: There’s a belief that the Nettey we’ve at Hearts of Oak is only 70%. There remaining 30% is what a recurring knee makes it impossible for him showcase but even with the glass nearly half empty, he’s efficient. Nettey’s obvious quality is his passing ability but many can pass. How well a player passes the ball depends on how well he reads the game, and Nettey reads the game really well. He knows when to pass to retain possession and when to pass to split defences. Makes me wonder what the much talked about 30% is made of.

Midfield- Mudasiru Salifu: Strong, ambidextrous, fearless. In a very tactical Match up, the game usually requires a ball carrier who can bulldoze his way through midfied-Mudasiru Salifu is that man. If I’m asked to describe his style of play as a midfielder in four words I’ll simply say HE ONLY MOVES FORWARD, and that’s because I can’t remember seeing him pass the ball backwards, rarely sideways. He’s an unstoppable wrecking ball who can only be stopped by bringing him down. Like Nettey, he’s had his fair share of injuries but that has done nothing to the fact that he’s a quality player.

Attacker- Fabio Gama: There were questions about Fabio Gama’s signing but the Brazzilains has made ample nonsense of it all. Always a step ahead of opponent’s and sometimes teammates, Gama has established himself as a fan favorite and undoubtedly one of the top performers of the season. Five goals and seven assists is certainly good return for a first season. So hello doubters (me included by the way), here’s your pie. Call is Humble.

Attacker-Ibrahim Salifu: In Several matches early on this season, Hearts of Oak clearly needed a driving force, that one player who could weave magic with a swing of his boot. Two reasons account for the phobians turnaround in fortunes-Samuel Boadu and Ibrahim Salifu. The attacker is the difference between the consistent Hearts of Oak we’re seeing and the mid-table strugglers he joined. Salifu is quick, in thought and execution but it is not merely the speed that makes him deadly, he’s technically equipped tear teams apart. He’s always believed he belonged at the very top and clearly that belief was never misplaced.

Attacker- Afriyie Barnieh: If any player at Hearts of Oak has benefitted from Samuel Boadu’s appointment, it’s Ghana’s Under 20 afcon winning skipper. He’s always been good but there were the odd wrong decision and frustrating penchant for not making up his mind every now and then. All of that however seems to be in the past as he’s put in more assured performances in the last three months. If there will be any arguments around the players selected in this list, I do not think any compelling argument can be make against his inclusion.