Common sense or a hatchet job? 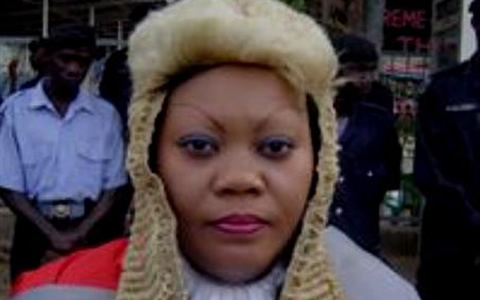 There is an article circulating on the Internet, primarily Ghanaweb.com, as of this writing (3/15/14), captioned "Hatchet Job On Justice Mabel Agyemag [sic]".

In it, the author rabidly accuses yours truly of fabricating flagrant falsehoods in a vicious attempt to malign the recently dismissed Ghanaian-born Chief Justice of Gambia, Mabel Agyemang.

As of this writing, I had not bothered to undeservingly dignify such lurid and inexcusably gratuitous accusation with a reading.

My reliable understanding from an informant who has read the aforesaid article, a long time friend and elder brother, for all practical purposes, is that it is largely a cut-and-paste plagiarizing of a former Jammeh foreign minister by the name of Mr. Sidi Sanneh with an axe to grind with Gambia's long-reigning dictator.

What I wish to emphatically observe here is that yours truly is no post-primary training college graduate. He attended two of Ghana's best secondary schools, at least at the time, and creditably acquitted himself.

In 1972, yours truly also scored highest on an essay examination for standards 5 and 6 pupils conducted by the Ghana Education Service (GES) in the Kyebi District.

He was then living with his maternal grandparents at Akyem-Asiakwa. His cousin, Ms. Adwoa Oppong, also scored the highest on the math exam.

And as an undergraduate of the City University of New York, yours truly was named a Ford Foundation Fellow (Scholar) and ranked among the top 1-percent of his graduating class. He would also be named University Fellow in graduate school.

I mention all of the preceding to principally underscore the fact that I definitely have class and conviction when it comes to my journalistic praxis. I am no Johnny-Just-Come-Lately trying desperately to make a mark.

Needless to say, when I took up the clearly avoidable predicament of Justice Mabel Agyemang, I had two objectives in mind, namely, to scorchingly reprimand her for having made the sort of facile and opportunistic decision that landed her in her all-too-predictable problem with President Yahya Jammeh; and two, to send a strong and unmistakable signal to the Madman of Banjul that Mr. Jammeh would not be able to so easily get away with doing any harm to Justice Agyemang, as had been the case with other Ghanaian citizens in the past.

Under absolutely no circumstances, whatsoever, did I set out to compose an autobiographical essay on Justice Agyemang which would, of course, have necessitated my extensive reading up on her personal and professional backgrounds.

I have done at least one political biography that has appeared on the website of the Ghana Academy of Arts sciences in recent years; and so I obviously know what I am talking about.

I just happen not to believe, for even a split-second, that Justice Agyemang is an unsuspecting victim of a vindictive and brutal military dictator. Nobody, to the best of my knowledge, forced her to accept a job from Mr. Jammeh.

Also, having served as a judge/magistrate under the auspices of the Commonwealth alliance is a job that one personally applies for, and does not necessarily make one a professional stand-out of any sort.

Justice Agyemang may be a remarkable jurist, but she is definitely not superior to any of Ghana's legion jurists that I have in mind.

Also, anybody has a right to defend Justice Agyemang's indisputably  obtuse decision to go to bat for Mr. Jammeh. I also have a bounden obligation to call a spade a spade.

Chances, though, are that if you cannot correctly spell my name, you also may well not know what you are talking about.