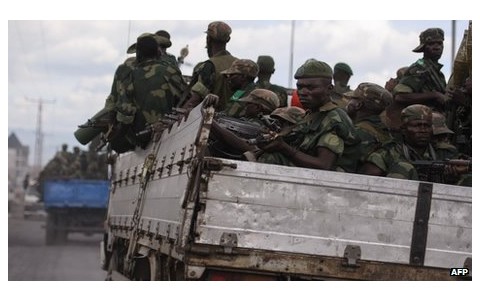 Congolese troops returned to the key city of Goma on Monday after M23 rebels withdrew during the weekend under a regionally brokered deal.

But the rebels have warned they will retake the city if the government fails to meet their demands within 48 hours.

The rebels left Goma 11 days after seizing it from Congolese troops backed by UN peacekeepers.

The M23 rebels mutinied and deserted from the army in April, with more than 500,000 people fleeing their homes in ensuing unrest in the mineral-rich region of the Democratic Republic of Congo.

On Monday, hundreds of Congolese army troops arrived back at Goma’s main barracks after rebel forces pulled out of the North Kivu provincial capital on Saturday.

The city’s airport is also due to reopen on Thursday to allow “humanitarian workers to get aid to displaced people”, authorities told the AFP news agency.

The rebels agreed to pull back to a 20km buffer zone around Goma in exchange for a series of demands, including the release of political prisoners.

But their retreat could be short-lived if President Joseph Kabila failed to enter negotiations by Monday afternoon, rebel spokesman Col Vianney Kazarama said.

“We gave Kinshasa a 48-hour deadline,” he told the Associated Press.

“You should call Congo and ask them what they plan to do. They have not yet contacted us. And we are waiting to see what happens, before pronouncing ourselves.”

Eyewitnesses in Goma said the rebels were much closer to the city than had been agreed.

Meanwhile, in a document addressed to the Security Council, a UN panel says it has evidence that the armies of Rwanda and Uganda supplied the rebels with troops, uniforms and guns in the lead-up to and during the invasion of Goma.

On 20 November, the day Goma was captured, some 500 Rwandan soldiers crossed into the city from the Rwandan town of Gisenyi, which lies just over the border, to back up the rebel forces, the report quotes various Congolese and Rwandan sources as saying.

The report includes photos of several people it identifies as Rwandan troops on Congolese territory.

He said the report was drafted by a sympathiser of the Democratic Forces for the Liberation of Rwanda (FDLR) rebel group, which is opposed to the Rwandan government and includes Hutu militiamen responsible for the 1994 genocide that killed some 800,000 people.

The UK government has suspended aid to Rwanda, amid concerns about the country’s role in the DR Congo conflict.