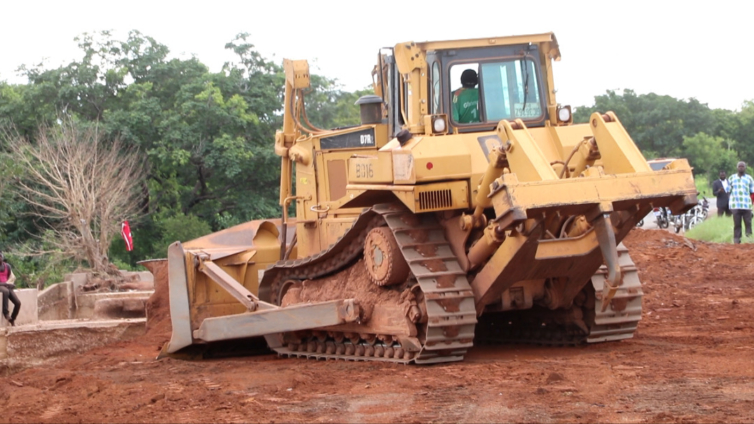 One out of four construction companies contracted by government to fix the major roads affected by the flood that hit the Upper West Region has commenced work.

The Lebanese-Ghana-based construction firm, P&W Ghanem is working on the Goriyiri section of the road located on the Wa-Nadowli highway.

The bituminous road was completely washed off leaving the culvert.

The ongoing work follows a visit by the Roads and Highways Minister, Kwesi Amoako-Atta, to the region after the disaster. He pledged to have the roads fixed within the shortest possible time.

When JoyNews visited the site, heavy moving equipment were spotted pilling and compacting gravel on the portions that were cut off.

This is to enable vehicles, motorcycles, tricycles and pedestrians to move from one end of the road to the other without any hindrance.

Material engineer of the Ghana Highways Authority in the Upper West region, Ing Kofi Adjei noted that the primary aim was to create access routes for commuters but the real work will be done after the rains are over.

Upper West Regional Minister, Dr. Hafiz Bin Salih who visited the site stated that he was relieved and happy about the spate of work done so far.

According to him, the other three contractors will be on-site in the next few days.

Some commuters who were present at the site expressed joy while thanking the government for coming to their aid.

“I am happy that government is tackling the road with all the seriousness it deserves,’’ a resident said.

DISCLAIMER: The Views, Comments, Opinions, Contributions and Statements made by Readers and Contributors on this platform do not necessarily represent the views or policy of Multimedia Group Limited.
Tags:
Flood
Upper West Region
Wa-Nadowli highway