Cooperate with ECG, security agencies for electricity to be restored to you – National Security Ministry to Kroboland 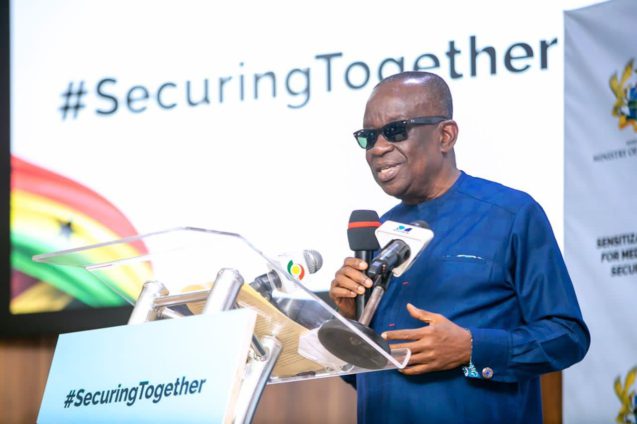 The National Security Ministry has urged residents of the Lower Manya Krobo and Yilo Krobo municipalities to cooperate with security agencies and the Electricity Company of Ghana (ECG) to enable smooth power restoration to affected areas.

According to the Ministry, the Eastern Regional House of Chiefs and other stakeholders had, at a meeting, reached a consensus to foster peace and security and promote socio-economic activities in both municipalities.

The consensus reached included a test on all power transmission lines and installation of prepaid meters.

“It is anticipated that the consensus reached between the said stakeholders would engender peace and security, promote socio-economic activities, and restore normalcy to the Lower Manya Krobo and Yilo Krobo Municipalities.”

“Residents of the Lower Manya Krobo and Yilo Krobo Municipalities are, therefore, urged to cooperate with the security agencies and the Electricity Company of Ghana to ensure law and order as electricity supply is restored to the affected areas.”

The Ministry made this known in a press statement issued on Wednesday, August 17.

Meanwhile, on Tuesday, August 16, engineers assessing the situation said 81 out of a total of 147 substations need fixing.

They revealed that earth cables, fuses and other components had been cut and stolen by unknown persons.

This was according to the Public Relations Officer of ECG Tema Region, Sakyiwaa Mensah.

She disclosed that the stolen parts and components would have to be replaced before power is restored.

“It’s critical to know that quite a number of the F-cables and fuses have been stolen from the transformers,” she told Accra-based Citi FM.

“Some unauthorized persons have also connected some aspects of the transformers on their own. We can not exactly tell when we will fix these technical issues.”

“But until they are fixed, we can not restore the power.”

There have been tensions between the residents and the ECG in recent times over the installation of prepaid meters.

This has led to some unidentified people cutting down electricity poles belonging to the ECG.

Also, unconfirmed reports had suggested that gunshots were fired at workers of ECG who were in the community to disconnect power from the main transformer which was serving a number of illegally connected homes in the area.

As a result, the municipalities have been without power for close to a month.